"The Open is an opportunity to sell greenkeeping to the world"

Old Course at St Andrews Course Manager Gordon McKie is looking to use the 150th Open Championship to showcase the greenkeeping industry to a global audience. 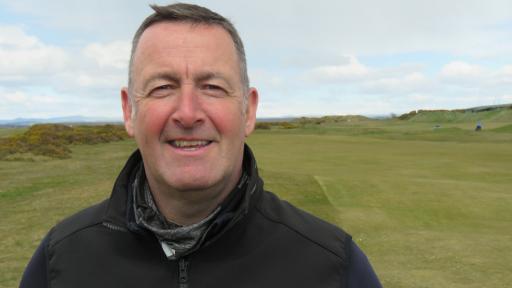 A little bit of wind and rain can go a long way at The Open, writes BIGGA's Karl Hansell for GolfMagic ahead of the 150th Open Championship on the famous Old Course at St Andrews.

Just ask Gordon McKie, whose first Open at St Andrews in 2010 was marred by torrential rain that forced the cancellation of the pre-event Champions’ Challenge and high winds causing a delay in play on Friday afternoon.

Gordon’s second Open, in 2015, was even worse weather-wise as Saturday’s play was suspended after just 32 minutes of action and, for only the second time in The Open’s history, the championship had a Monday finish.

This time around, the course manager at the Old Course is hoping for something a little more moderate. A three-year rough management plan will culminate at the 150th Open and Gordon is hoping that this toughening of the course coupled with a little Scottish wind and rain will provide a tough test for the world’s best golfers.

“That will be one of the big differences that people notice this time around, that there is a bit more rough at St Andrews than there has been before. There are double fairways all over the place, so there’s plenty of places you can hit the ball, but there’ll also be holes like 17, which will feel tighter because the rough is a bit thicker,” explained Gordon.

“There’s not a lot of defence on the Old Course, so we’re relying on the weather and the wind to blow.”

With 50,000 rounds on the Old Course each year and greater-than-normal traffic post-COVID, the rough usually takes a hammering. It may not seem much when you’re wandering backwards and forwards searching for an errant tee shot, but all those footprints actually suppress growth in the rough – good for amateurs but bad if you’re looking to set a tough challenge at a major championship.

Over the past three years, the team has roped off large areas of rough to protect it and with these ropes staying in place right up until the week before the tournament, it’s going to make a noticeable difference.

“If it becomes the topic of conversation at the press conferences, that’s never good,” said Gordon. “But in terms of setting up the course, it’s a major championship and so it should be tough. If you hit a bad shot you will be punished and the premium is to hit the ball onto the short stuff. If you do that, you’ll score well.”

@TheHomeofGolf So officially closed until @TheOpen commences play in just over 3wks, much to do but have the team in place to get the job done ! #standrews #open #teamwork #LetsGo #letsdothis pic.twitter.com/fTCHb83Vc0

Away from the rough, one of the biggest talking points at this year’s historic 150th Open is actually taking place prior to play each morning. For the first time in history, the greens at The Open will be prepared using ride-on, fully electric ‘triplex’ mowers. It’s part of a massive sustainability drive by the St Andrews greenkeeping team that is showcasing how golf can improve its green credentials and be a force for good in the face of climate change and other environmental issues. Golf clubs have long been making strides in a more sustainable direction, but there will never have been this level of exposure before and Gordon hopes the message trickles down through all levels of the game.

The greens on the Old Course measure 2.5 hectares, equivalent to around six football pitches. Each morning, starting at 4.30am, they would previously have been cut twice (known as ‘double cutting’) by 24 greenkeepers using petrol powered push mowers. That number of greenkeepers was required in order to get the greens ready ahead of the first tee time at 6.30am.

“People watching on television would see a great golf course that looks fantastic, but how sustainable is that?” said Gordon. “We asked how we could prepare the greens in a more sustainable way and the only option was to use triplex mowers. We can cut those 24 greenkeepers down to eight and that’s an important message because we’re all under pressure in terms of staffing numbers. I’ve said to fellow greenkeepers, if we’re using ride-ons for an Open Championship, then it’s good enough for club championships too.”

Relive The Open For The Ages - a special, celebratory Championship first broadcast in 2020 that features real footage from past Opens at St Andrews https://t.co/o1uLObYG2c pic.twitter.com/MuP0mLdFW9

The other advantage of using electric mowers will be raising awareness of how new, cleaner machinery will become more prevalent on golf courses over the coming years. The Carnoustie team used fully electric mowers at the Women’s Open in 2021, but doing so at The Open itself will create a new level of awareness. The use of electric mowers on the Old Course’s greens rather than petrol is estimated to reduce the carbon footprint of the process by over 10 times.

Gordon said: “This has always been a big focus for us and as soon as we could, we wanted to go electric with as many vehicles as possible. I never thought we would get to this stage, but if it produces the same conditions and the same surface that a pedestrian mower would with fewer staff and no fuel emissions, it’s a great message.”

It’s all part of a greater ambition on Gordon’s part to raise awareness and understanding of the greenkeeping profession. This aligns closely with the activities of BIGGA, of which Gordon is chairperson of the Scottish & Northern Ireland Region, and the hope is that greater awareness of what it takes to prepare and maintain a golf course will elevate the profession and encourage more people to consider it as a career.

Certainly, there can be few career choices where you can get the excitement of preparing a venue for world class golfers and celebrities, or work in such spectacular natural environments, with the potential to take up roles anywhere in the world. It makes those 4.30am starts on tournament days a small price to pay.

The Old Course closed for play on Friday 17 June to allow it three weeks of rest and recovery. The turf team for the event has been reduced to around 50 greenkeepers (there were 100 volunteers at the US Open, in addition to other members of the maintenance team). The greenkeepers will also be supported by The Open Volunteer Support Team, made up of BIGGA members from all over the country (and some international members) who help ensure the bunkers are in top condition throughout the event.

An awareness of staff welfare means the St Andrews greenkeepers are given every second day off throughout the event, with staff working on a rotation. It’s just another example of how St Andrews Links and The R&A are trying to do the right thing and act as beacons for the wider industry.

“Staff welfare is a big challenge that we all have to face now and we must manage things slightly differently,” said Gordon. We’re all trained to look after turf, but we’re also having to adapt and be aware of health and wellbeing, particularly on the back of COVID-19.

“Our team has changed quite a bit since the last Open. We’re lucky we have a DP World Tour event every year, so over the last two or three years we’ve been trying out different people in various roles. I think of it like a football manager getting the opportunity to try different players in different positions to find out who fits best. One of the big focuses this year is we’ve taken on a lot more apprentices, so we’re throwing them in and trusting every member of the team to go out there and do their job.

“A golf tournament is an opportunity to sell our golf course to the world, but it’s also an opportunity to sell greenkeeping to the world. I’ve had countless messages through social media, email, texts, just wishing us all the best. Everyone around the world has a close affinity to St Andrews and it’s crazy that what we do is so important to so many people. I get people who are not greenkeepers – they can be lawyers, doctors, whoever – following us on Twitter and LinkedIn and they’re interested in what we’re doing on the course.”

WATCH: WOULD YOU HIT THIS FAIRWAY AT ST ANDREWS?!

Although expectations are higher than ever before and one errant weed can show up on high-definition television coverage, appreciation for the greenkeeping profession is one that is seemingly growing at the highest levels of the game. Whether sharing a golf buggy with Tom Watson or offering curious caddies some tips about pin placement and greenspeeds, there’s a real understanding of the vital role greenkeepers play in the success of the game.

Gordon said: “The friendliest professional that I’ve ever spoken to on the course was Annika Sorenstam. She was absolutely fantastic and I had a 10-minute chat with her on a green at the first Women’s Open in 2007. She came across to me and asked if I was the superintendent, then started telling me all the great things about the golf course. In general, the women and most of the guys are so appreciative of what we do.

“I’m just the face of greenkeeping at St Andrews, but hopefully events like The Open provide the opportunity to tell the story from the greenkeepers’ perspective and that will encourage more people to get into the industry. I’ve been doing this for a long time and I still enjoy it, I still get a buzz. When you get here first thing in the morning and you go onto the golf course, there’s no better place to be.”