Tiger Woods and Rory McIlroy practice together at Ballybunion in Ireland

Tiger Woods told the media at the JP McManus Pro-Am that he would stay in Ireland to practice ahead of The 150th Open Championship at St Andrews. 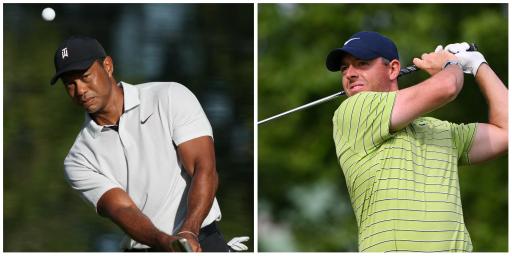 Tiger Woods and Rory McIlroy have been pictured practicing together in Ireland ahead of The 150th Open Championship next week.

Landing by helicopter at the famous Ballybunion Golf Club in County Kerry, Woods and McIlroy emerged to tee it up for the first time since participating in the JP McManus Pro-Am.

The pair with four Claret Jugs between them were pictured at the Irish links course on Thursday morning. His practice round venue for the final major of the year has finally been revealed.

At the world-class Pro-Am at Adare Manor which has raised more than $140,000,000 for charity since 1990, Woods refused to tell the media where he would practice in Ireland to avoid any unwanted attention.

Great to see @TigerWoods and @McIlroyRory in Ballybunion this morning. Tiger absolutely tearing it up and leaving Rory in his wake. @TWlegion pic.twitter.com/Q7qDSn50DR

"No, I don't want to tell you because I don't want everyone coming down and watching us," said the 15-time major champion. He finished in a tie for 39th in the 36-hole professional event at Adare Manor.

Woods and McIlroy are not the only players to have visited Ballybunion this week. World No.1 Scottie Scheffler also played at the course founded in 1893.

Many of the PGA Tour stars have chosen to test themselves on the best links courses in Europe this week. Jordan Spieth, Justin Thomas and Rickie Fowler visited Lahinch and Tralee and all three of these players are teeing it up in the Genesis Scottish Open as we speak.

As a co-sanctioned event between the DP World Tour and the PGA Tour, 14 of the top 15 players in the world are playing at The Renaissance Club in North Berwick.

Woods and McIlroy may be absent from this Rolex Series tournament, but what we do know is both of these major champions will be looking for glory at the final major of the year at the home of golf next week.

Next Page: How to live stream the Genesis Scottish Open for free online...