Rory McIlroy on failing to win The Open: "It's one I feel I let slip away"

Cameron Smith fires a 64 to win The Open as major heartache for Rory McIlroy goes on for another year. 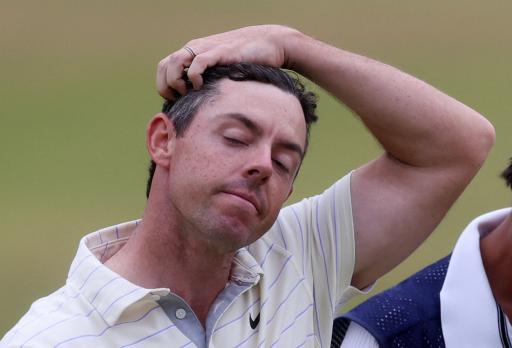 Rory McIlroy may have finished third in the 150th Open Championship but the four-time major champion believes it's one that slipped away at St Andrews.

Despite sharing the 54-hole lead with Viktor Hovland heading into the final round, it was Australia's Cameron Smith who etched his name on the famous Claret Jug at the Home of Golf.

Smith fired a stunning 8-under 64, highlighted by five straight birdies from the 10th, to finish 20-under par and one shot clear of playing partner Cameron Young, who eagled the final hole.

At one stage of the final round, McIlroy led The Open by two shots.

But that was before Smith surged with five birdies in a row from the 10th to race ahead of McIlroy.

The wait for McIlroy to land a fifth major title now goes into a ninth year, not that he needs any reminding.

While disappointed not to win a second Open and his first at St Andrews, McIlroy is not going to beat himself up about it.

"I'll be okay. It's not -- at the end of the day, it's not life or death," a disappointed McIlroy told the media after the final round.

"It's one that I feel like I let slip away, but there will be other opportunities."

While many considered The Open was going to become a Sunday Shootout between McIlroy and Hovland, the Northern Irishman admitted that he always knew someone was going to charge out of the chasing pack.

It just happened to be the two Camerons in the penultimate group.

"I sort of expected someone to come from the pack," he said.

"The two Camerons obviously played very well today, they made life difficult for me.

"I played a controlled round but when I really needed to make some birdies at the start of the back nine, I couldn't. I tried my hardest obviously.

"Cam played an unbelievable first two days, then sort of got his bad one out the way yesterday and then followed it up with a great round today.

"I came up short, two shy of what I needed, I thought I needed to get to at least 20 under and didn't quite get there. I'm disappointed I didn't do that.

"I gave another good account of myself this week and I've got to keep plugging away and keep the head down and keep moving forward."

McIlroy was also frustrated to not put on a show for his adoring fans, at least in the final round.

"The support I got this week was phenomenal," said McIlroy, who played in front of 290,000 spectators during the week at St Andrews.

"I really appreciate it and it doesn't go unnoticed. Everyone was with me every step of the way, and I just wish I could have played a bit better today to give them something to really cheer about."

Despite his agonising finish at St Andrews, McIlroy did at least finish in the top 10 in all four majors for the first time in his career.

And that is a major positive he is going to take moving forwards.

"Jeez, compared to the last few years in the majors it's been really positive," said McIlroy.

"Second at Augusta, third here, fifth at the US Open (and eighth at the US PGA), the game is heading in the right direction.

"I just didn't get it done today but unfortunately there are eight months until the next major comes around.

"I can't get too despondent, I've played great this season and now want to finish this season off well."

Next Page: Henrik Stenson moves ever closer to joining LIV Golf and being axed as European Ryder Cup captain