Cameron Smith carded a superb 64 on Sunday to topple Rory McIlroy at St Andrews, winning his maiden major title by one shot at the home of golf. 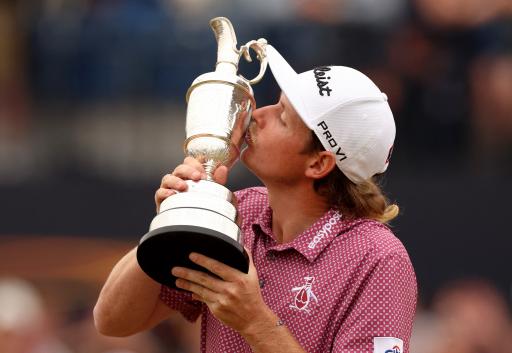 Cameron Smith put on another scintillating putting display to win The 150th Open Championship, carding a 64 to finish one ahead of Cameron Young and two ahead of Rory McIlroy.

Smith now joins Jack Nicklaus as the only player to win The Players Championship and The Open in the same season. Nicklaus achieved that feat in 1978, the same year he won at St Andrews.

The Australian made five consecutive birdies on the back nine to take the lead. McIlroy led by two shots with nine holes to play, but he only made two birdies in the final round at St Andrews.

It will be another major disappointment that the Northern Irishman will look back on, but for Smith, he has won his first major title and completed the joint-largest comeback win at St Andrews in Open history.

Young, a PGA Tour rookie in 2022, recorded his fourth runner-up finish of the season which is the joint-most of any player since Louis Oosthuizen did the same last season.

After a final-round score of 71, Filippo Celli won the Silver Medal as the low amateur of the week. He finished six shots clear of Aaron Jarvis who finished on 1-over-par.

"What a week. I'm going to fall apart here," an emotional Smith said addressing the crowd on the 18th green.

"I thought the course was exactly how an Open Championship should be played, firm and fast, tough pins. It was just unreal, so thank you guys so much.

"I had a lot of support out there, especially the Aussie guys, you guys really kept me going out there. It seemed like there was a lot of you guys out there which kept me plugging away, so this one is for Aus!"

Smith began the final round in Scotland four shots behind McIlroy and Viktor Hovland and he made a solid start with two birdies in his opening five holes.

Hovland bogeyed the 4th hole and McIlroy birdied the 5th hole. After an uneventful front nine, McIlroy was in cruise control two shots ahead without doing anything spectacular.

But Smith pressed the issue by making birdies on the 10th, 11th, 12th, 13th and 14th holes to reach 19-under-par. He was now one shot in front of McIlroy who couldn't get his putter going like his fellow PGA Tour member.

Despite falling short of the bunker on 17, the famous Road Hole, Smith masterfully putted his ball around the trap to 10 feet. He made an incredible par and topped it off with a birdie on the final hole to reach 20-under.

Young made a superb eagle on the final hole which put Smith under a brief moment of pressure, but it was yet another second-place finish for the impressive 25-year-old who carded a 65.

McIlroy agonisingly missed a birdie putt on the 16th and went close again on 17 after a superb approach to 18 feet. Needing an eagle on the final hole, the 2014 Open champion could only make par after chipping his ball past the pin.

Next Page: DP World Tour pro says "no thanks" as Sky Sports ask for more Ian Poulter on mic