Rory McIlroy won the Claret Jug in 2014, but this was the last year that the Northern Irishman won a major title and it's been a series of disappointments since then. 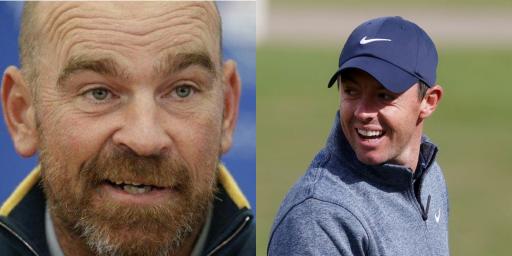 Former Ryder Cup captain Thomas Bjorn believes Rory McIlroy is "a man on a mission" at the 150th Open Championship at St Andrews this week.

Speaking in his blog for Online Betting Guide OLBG, Bjorn believes McIlroy is determined to win his first major championship for eight years and his second Claret Jug.

The big Dane, who led the European Ryder Cup side to victory in France in 2018, talked up the chances of Tiger Woods and Matt Fitzpatrick of becoming the champion golfer of the year as well.

He complimented their tactical ability to plot their way around golf courses as Fitzpatrick showed at the US Open last month, but he believes McIlroy has the "aura and personality" to pick up the Claret Jug at golf's most famous venue.

"He's got the bit between his teeth at the moment, he really does look like he's a man on a mission," Bjorn said.

"I wouldn't say he went missing but he's struggled a little bit with certain parts of his game - yet at the moment, he seems very determined, very focused on achieving. And when players of that calibre have that kind of mindset, they are always very dangerous.

"He certainly has an aura and personality to have an Open Championship at St Andrews. Historically, all the greats of the game have succeeded around there."

If you forget the last two Opens where McIlroy has disappointed, he made four consecutive top-five finishes from 2014 to 2018 (he missed the 2015 Open Championship due to injury).

He came tied second at Carnoustie in 2018, but his crowning moment came at Royal Liverpool in 2014 when he fended off Sergio Garcia and Rickie Fowler to win his first and only Open.

The 33-year-old will tee off with defending champion Collin Morikawa and Genesis Scottish Open champion Xander Schauffele in the first two rounds.

Next Page: Jack Nicklaus confirmed as honorary citizen of St Andrews ahead of The Open