Martin Slumbers, the chief executive of The R&A, spoke about LIV Golf ahead of the 150th Open Championship. 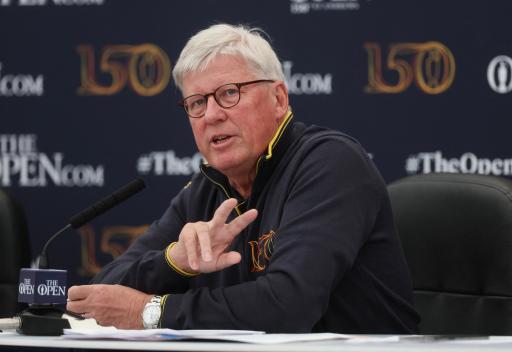 Martin Slumbers, the chief executive of The R&A, says banning LIV Golf players from future Opens is not on their agenda but they will review their qualifying criteria going forward.

Slumbers faced the media today ahead of the 150th Open Championship at St. Andrews where he was firm in his rebuttals of the Saudi-backed league, echoing the thoughts of Tiger Woods.

The chief executive said that LIV Golf was “not in the best interests of the sport” as the business model of the controversial league “undermines the merit-based culture and spirit of open competition that makes golf so special”.

Slumbers delivered one damning line as he faced the questions this morning about players having their cake and eating it: “There’s no such thing as a free lunch.”

"Looking ahead to The Open next year, we have been asked quite frequently about banning players," he said.

“Let me be very clear. That's not on our agenda. But what is on our agenda is that we will review our exemptions and qualifications criteria for The Open

"And whilst we do that every year, we absolutely reserve the right to make changes as our Open Championships Committee deems appropriate.

“Players have to earn their place in The Open, and that is fundamental to its ethos and its unique global appeal.

"I firmly believe that the existing golf ecosystem has successfully provided stable pathways for golfers to enter the sport and develop and realise their full potential," he said.

He added: “I can look in the eye of any boy or any parent of that boy and know that, if he comes into the game and wants to get to the top, wants to play this game, that there is a pathway to the top totally based on his ability and his willingness to work hard.

“That has been fought for by our sport for 100 years, that pathway from picking up a golf club to playing at the top level.

“I think it's worth fighting for. And that pathway is the biggest piece of the ecosystem for me.”

Read here what Woods said about LIV Golf before The Open.

In other news, the Official World Golf Ranking chairman Peter Dawson has confirmed an application by LIV Golf for accreditation.

The board will discuss the application during this week’s Open.

In other news, Greg Norman was disinvited to the past champions’ celebrations ahead of The Open. The R&A said they hoped in the future he could be a part of the major.

But they were worried his presence would detract from the week.

Rory McIlroy said he “supported” that decision, which Norman described as “petty”.

Phil Mickelson was reportedly told he was welcome to attend, but he chose not to.

Next page: Nobody is picking me to win The Open, says Scheffler