Rory McIlroy on Open chance: "I'm not going to take anything for granted"

Rory McIlroy and Viktor Hovland have raced clear of the chasing pack at The Open - but who will come out on top at St Andrews? 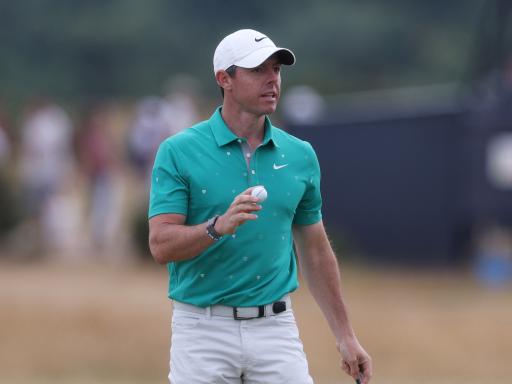 Rory McIlroy believes he holds a minor advantage over his rivals heading into the final round of the 150th Open Championship, but that he will be taking nothing for granted on Sunday at St Andrews.

European Ryder Cup pals McIlroy and Viktor Hovland played together on day three at the Home of Golf and produced two fantastic rounds of 66 to march to 16-under par and four shots clear of a chasing pack that includes Cameron Smith and Cameron Young on 12-under par.

Four-time major champion McIlroy is not getting ahead of himself, but he does consider he holds the aces having already etched his name on the famous Claret Jug in 2014.

"Yeah, I think so," replied McIlroy when asked if banking four career majors will matter in the final round.

"But at the same time those players are playing great golf to be in this position.

"So I'm not going to take anything for granted. I don't feel like I can fall back in any sort of experience. Just like being here before and I've done it. But nothing's given to you and I have to go out there and earn it just like I've earned everything else in my career."

McIlroy is seeking to win his first major since the 2014 US PGA Championship, the same year he won The Open at Royal Liverpool.

World No.1 and reigning Masters champion Scottie Scheffler is still in the mix for his first Open Championship but he will need to overhaul a five-shot deficit from 11-under par alongside Si Woo Kim.

Former World No.1 and two-time major champion Dustin Johnson is a further shot back on 10-under par, with reigning US Open champion Matt Fitzpatrick on 9-under par with Tommy Fleetwood and Adam Scott.

McIlroy knows given the low scoring out there on the Old Course that at least 10 players are still in the mix for the championship.

"I think we've seen it all week, people can go out and 30, 31, whatever it is. I think for me it's expect the unexpected," said McIlroy.

"But at the same time, I have to focus on myself. If I go out and I post a good number, I can't worry about if it's Viktor or if it's the two Camerons, if it's whoever it is. I just have to do my thing. And I've been doing my thing for the last three days and it's put me in a good position."

Who will win the 150th Open Championship? Get involved with our latest Twitter poll and cast your vote: