Rory McIlroy and Viktor Hovland will play in the final group at the 150th Open Championship at St Andrews. 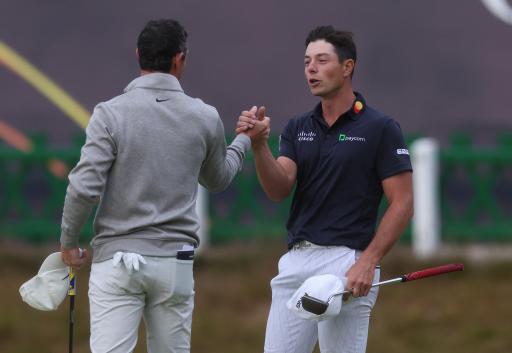 Rory McIlroy will have a chance to end his major drought at the 150th Open Championship at St Andrews after firing another round in the 60s at the Old Course that was highlighted by a stunning hole out from the bunker for eagle.

McIlroy, 33, needs no reminding that it has been eight years since he has won a major but he will duke it out in the final group with his Ryder Cup Europe team mate Viktor Hovland.

The Northern Irishman and the young Norwegian have reached 16-under par and will play in the final group at the home of golf.

It is looking like one of the two will break Tiger Woods' record of 19-under recorded at the Old Course.

Related: McIlroy says he is "not going to take anything for granted" in the final round of The Open

Hovland went bogey free in a third round performance that belied his years. McIlroy only dropped one shot at the 17th, the Road Hole, when his approach was just too hot.

Other than that, it was a superb display of golf from both players.

Speaking to Sky Sports afterwards, McIlroy admitted that it was "really cool" to hole out from the sand at the 10th hole.

"It landed perfectly," he said, describing it as a bonus. "Things like that need to go your way at certain times."

He was asked what gives him the belief that he can go out and win. McIlroy said he was a better player than he was 12 months ago.

"I've done it before, I can do it again, I've just got to stay in my own little world," he said.

Asked what it would mean to win, he said: "It would mean everything because of what I have been through".

Cameron Young is also in the mix at 12-under par, alongside the Australian Cameron Smith on the same score.

Smith had a difficult day but he fought hard to card a 1-over par 73. Young notched a 1-under.

The Australian's round threatened to derail completely at the par-4 13th hole when his tee shot left him no stance whatsoever for his second shot.

He ended up departing the hole with a disastrous double bogey but picked up one of those shots at the very next hole, then made four straight pars on his way back to the clubhouse.

Scottie Scheffler (69) and Dustin Johnson (70) are by no means out of it but will need incredible rounds tomorrow if they are to lift the Claret Jug.

Matthew Fitzpatrick, Adam Scott, Tommy Fleetwood are grouped at 9-under par in a tie for eighth.

Jordan Spieth and Patrick Cantlay are one stroke adrift of those players.

More: Fitzpatrick on Tiger's walk up 18

Leaderboard after round three at the 150th Open Championship:

Next page: LIV Golf players discuss what it's like playing The Open