After swearing and using offensive sign language on the 11th hole at Royal St. George's, Tyrrell Hatton once again let loose on the 18th hole. 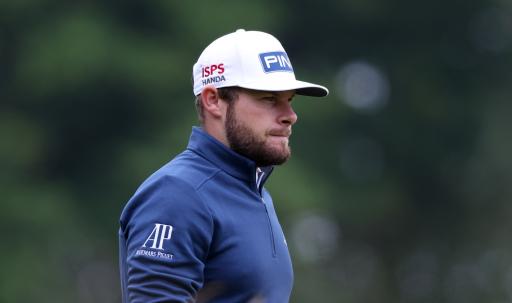 Tyrrell Hatton reached boiling point to its maximum on day two of The Open Championship at Royal St. George's by snapping his club on the 18th hole.

The Englishman needed a better round on Friday after he shot 2-over-par in the first round and he was beginning to recover with birdies at the 12th and 14th holes.

WATCH: TYRRELL HATTON DROPS F-BOMB AND FLIPS OFF A FAN AT THE OPEN!

He made a bogey on the 17th hole and after he hit a poor approach to the right of the 18th green, his temper got the better of himself once again as he stamped on his club and snapped the shaft.

Hatton did manage to make an up-and-down from a difficult position to finish with a round of level-par, but his overall score of 2-over-par is likely to miss the cut.

This club snap rounded off a turbulent day for Hatton, who also let his anger and frustration known on the difficult and long par-3 11th hole.

After making a damaging double-bogey, the BMW PGA champion used some extremely expletive language and pointed his putter towards something off to the side of the green.

We are unsure as to what he appeared to be pointing at, however, Hatton is no stranger to showing his passion and anger on the golf course.

There is also footage that shows the former Arnold Palmer Invitational winner using offensive sign language with his right hand as he missed a putt on the 11th green.