Collin Morikawa was in scintillating form on the second day at The Open Championship, carding a round of 6-under-par. 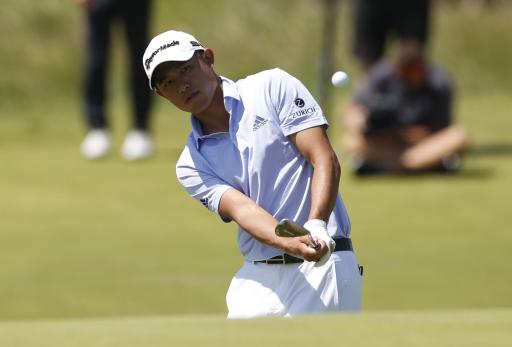 Collin Morikawa was in unstoppable form on day two at The Open Championship, carding a superb score of 6-under-par to hit the front of the leaderboard.

The American began his round on 3-under-par, after an opening-round 67 on Thursday, and he came out the blocks on Friday with two birdies in his opening five holes.

He added birdies at the 8th and 9th holes to make the turn in 4-under-par and 7-under-par for the tournament, and he was staring the course record at Royal St. George's directly in the face.

The 2020 PGA champion made more birdies at the 11th, 12th and 14th holes and as he was 7-under-par for the round, he was now looking at rivalling Branden Grace's record score at the 2017 Open Championship of 62.

Unfortunately, Morikawa made a bogey at the 15th hole to finish with a round of 64 and with an overall score of 9-under-par.

If anything, the man from California has now stretched the field and forced them to make a move, as he set a three shot-lead over Louis Oosthuizen, Daniel Van Tonder, Marcel Siem and Emiliano Grillo.

With his superb play on Friday, Morikawa has set the record for the lowest score ever shot after 36 holes from an Open debutant. His round is just another sign of his unprecedented rise to golf stardom.

Although he finished low down the leaderboard at the Scottish Open at the Renaissance Club last week, Morikawa finished tied fourth at the US Open, so he is clearly a man for the big occasion.