Francesco Molinari was untouchable in 2018 and 2019, but his recent form has been surprisingly poor. 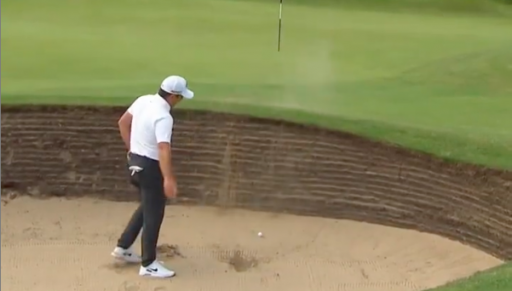 Francesco Molinari enjoyed a good start to the Open Championship on Thursday, but he suffered a horror show on the par-3 6th hole in his second round.

The 2018 Open champion birdied the first hole of his second day to move to 3-under-par for the tournament, a good score that was in the thick of contention at the time.

But after a bogey on the 3rd hole, Molinari found the sand with his tee shot on the par-3 6th hole, which is one of the most popular spots on the course for spectators.

Unfortunately for the Italian, he failed to get out the bunker with his first attempt, and then did the exact same thing the second time with the ball almost rebounding back against him off the lip.

The three-time PGA Tour winner opted to play out sideways with his fourth shot. He chipped on and two-putted for a miserable quadruple-bogey and his round had been completely ruined.

The deep bunkers around the 6th hole at Royal St. George's can be extremely difficult to negotiate and it is very hard to make a par if you find the sand.

Molinari has missed the cut in four of his last six appearances on the PGA Tour, which is in stark contrast to the golf he showed when winning The Open at Carnoustie and earning maximum points for Team Europe at the 2018 Ryder Cup in France.

NEXT PAGE: COLLIN MORIKAWA: WHAT'S IN HIS BAG AT THE 2021 OPEN CHAMPIONSHIP?