A video of Tiger Woods walking very early before making a putt at the President's Cup went viral, but it was a fake video. 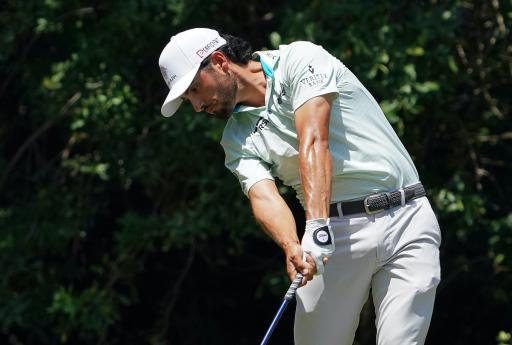 Abraham Ancer was beaten 3&2 in the Sunday singles at the 2019 President's Cup by Tiger Woods, and it was Woods' final putt at the 16th hole that caught the eye.

The video of Woods rolling in the lengthy putt was edited to look as though the 15-time major winner went to shake Ancer's hand long before the ball had dropped.

Although the video went viral and many golf fans thought it was real, Woods had actually waited far longer for his match-winning shot to go down.

While speaking on Golf Digest's "Be Right" podcast, Ancer said that he has now been sent the video thousands of times and he gave credit to how it was edited.

"I think it's been sent to me north of 10,000 times," Ancer said while speaking to Golf Digest.

"Yeah, of course I've seen it. It was a great edit, whoever did that I give them props, because it came out pretty good, for sure."

The World No. 26 was making his debut at the President's Cup for the International team in 2019 at Royal Melbourne and he made an impressive first appearance, taking three points out of five matches.

Prior to the tournament, Ancer mentioned that facing Woods in the Sunday singles would be an amazing prospect.

"So they asked me this question a month before the Presidents Cup in Mexico, at Mayakoba, they asked me who would I want to play against in singles," Ancer added.

"I was like, man, would be a dream come true to play against Tiger Woods, are you kidding me? It was like, no disrespect to the other guys, but I don't really care who I play but Tiger Woods would be amazing, it would be life-changing."

The 30-year-old is having a consistent season in 2021 with 11 top-25 finishes in 17 events, but he is still searching for his first PGA Tour title.

Previous
Who is Bryson DeChambeau's girlfriend? Meet Sophia Phalen Bertolami
Next
Rory McIlroy hits it over 370 YARDS down the 2nd hole at Wells Fargo!