Bryson DeChambeau reportedly started dating Sophia Phalen Bertolami in 2018 and the pair have been a couple ever since. 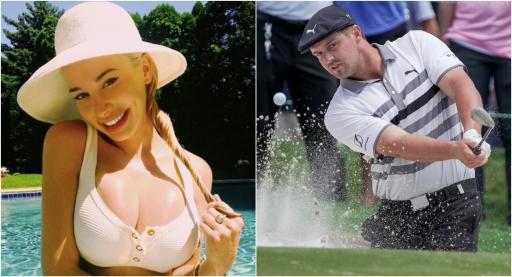 Bryson DeChambeau has experienced a lot of success on the PGA Tour in the last 12 months, winning the US Open back in September and the Arnold Palmer Invitational in March.

But what golf fans and experts often don't see is the support that the golfers receive behind the scenes, and it is fair to say that the 27-year-old's girlfriend has been with him throughout every step of his recent success.

Sophia Phalen Bertolami, who was born in Tennessee, is a clothing model and artist who enjoys posting her work on her social media pages.

But prior to her modelling career, Bertolami went to Cohasset High School in Massachusetts and later attended Chapman University in California.

She graduated from Chapman University in 2014 with a degree in Kinesiology and Nutrition, so it is fair to say that she is an intelligent and hardworking person.

She then went on to become a nursing student and studied pharmacology at Belmont University in Nashville. In 2020, Bertolami announced that she would be joining the residency program at Vanderbilt University Medical Centre.

It would appear that Bertolami is a lady with a vast range of interests in her life, and as her big-hitting boyfriend is nicknamed "The Scientist", the pair may share similar interests in the scientific department.

As is made clear by her social media posts, Bertolami is an extremely supportive partner and they make for a talented couple with a variety of skills.

NEXT PAGE: GARRICK HIGGO MAKES HOLE IN ONE EN ROUTE TO ANOTHER EUROPEAN TOUR WIN!