Adam Scott took his shoes off to play a phenomenal flop shot out of the water during the opening round of the Honda Classic. 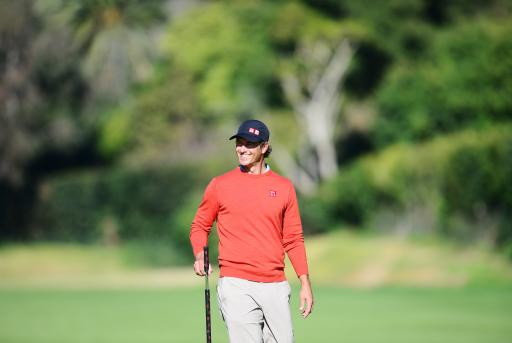 Adam Scott might have just made the best par save on the PGA Tour in 2021 during the opening round of the Honda Classic at PGA National.

The Australian started his round on the back nine opening with a bogey and things looked like they would get even worse for Scott at the next, when his approach shot flew 168-yards before finding the water.

Scott slipped off his shoes and socks, rolled up his trousers and put a jacket on over the top of his polo in preperation to get a little messy at the 11th hole.

He stood at the ball as if it was in a bunker and produced a fantastic flop shot to leave himself with a chance at saving par.

WATCH THE BRILLIANT PAR SAVE FROM SCOTT BELOW:

The shoes are coming off...@AdamScott with a wild par save. #QuickHits pic.twitter.com/kxP3hUZWJ3

It was a phenomenal shot from the former Honda Classic winner, who then made a run of pars before making an eagle at the par-5 18 to reach the turn at 1-under par.

The epic up-and-down might have taken many by surprise, but Scott recently said in a press conference before this week's action got underway that he felt his short game was "fantastic" and it was his long game that needed some work.

"My short game is fantastic at the moment," Scott said on Wednesday. "I mean, for sure the best consistently it's ever been, which is fortunate, otherwise I'd be selling hot dogs, not playing golf if I didn't have one."

PGA
PGA tour
pga tour news
Honda Classic
Adam Scott
adam scott par save
PGA national
Previous
"You play golf?" - What it’s like to be a 30-something female on the course
Next
PGA Tour player hits shot TOPLESS during Honda Classic first round