Lee Westwood: "I suppose I'm not expecting too much this week, but I don't know what to expect from myself at the moment." 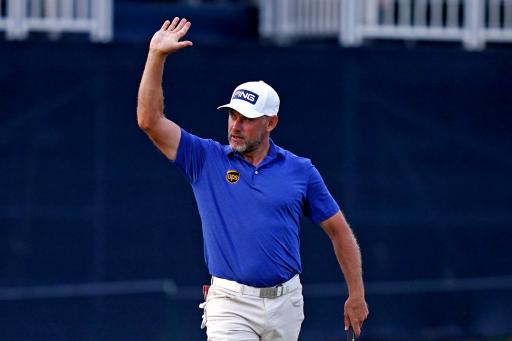 Lee Westwood said he is feeling "drained" after he took a trip to Augusta National with his son following his runner-up finish at The Players Championship.

The Englishman has been in fine form as of late, after capturing the Race to Dubai title for a third time at the end of last year, before posting back-to-back second place finishes on the PGA Tour.

After putting in a phenomenal performance at TPC Sawgrass, Westwood made the trip to Augusta National with his son where he has played 54 holes in just a couple of days and the former World No.1, who turns 48 next month, is feeling slightly fatigued as he prepares to take on PGA National

"I feel a little bit drained," Westwood said ahead of this week's PGA Tour action. "My legs are feeling it a little bit. I played Augusta with my son and we ended up playing 36 holes on Monday, which is not the easiest walk around there, and then 18 holes yesterday morning.

"I've played a lot of golf recently. I'll try not to do too much before tomorrow's first round in the afternoon. I'll get a good night's sleep tonight and try and recharge my batteries a little bit, get plenty of carbs and see how we go.

"I suppose I'm not expecting too much this week, but I don't know what to expect from myself at the moment. I'm obviously coming off two good results and my game feels good. I'm putting well, and you know, if I'm feeling all right tomorrow, there's no reason why I shouldn't play well.

"I play well around this golf course. I finished fourth here last year, and it's a course that sets up well for me, so I'm looking forward to it."

Westwood will have his son Sam as his caddie at the Honda Classic, with his fiancee Helen Storey taking a break, although she will resume her normal duties for at least two of the majors this year.

"He [Sam] chipped in on 18 yesterday to take the money," Westwood added. "We'll not discuss the shots. I will say it's as hard as I've seen Augusta play, even when it's been the week of the Masters.

"It was cold yesterday morning, 45, 50 degrees. It was playing long and the greens were like rock. They were really releasing out. It was a tough couple of days to play Augusta. Yesterday I think he shot 82. I set him a target of 83 and he chipped in on the last for birdie for 82, so he won the money.

"It [the caddie role] is a negotiation process. Helen [Storey] is doing the PGA Championship and The Open, I think. I'm not sure about the Ryder Cup yet… we'll cross that bridge if I get in the team!"