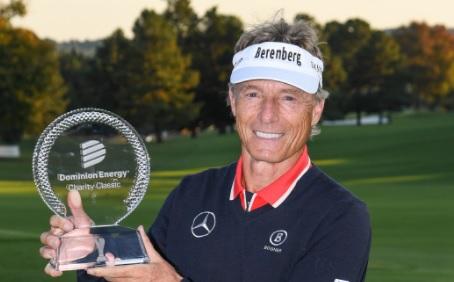 Bernhard Langer re-wrote the record books last night as he became the oldest winner in senior golf history at the age of 64.

Langer defeated Doug Barron with a birdie at the first extra hole to land an incredible 42nd win on the PGA Tour Champions.

It marked Langer's first victory of 2021, albeit with the circuit facing a host of cancellations during the season due to Covid.

"I’ve been knocking on the door. I’ve lost a bunch of playoffs. I tried to forget about that and block it out of my mind because I’ve had a lot of close calls," said Langer.

"It’s an awesome feeling. I hadn’t won since Tucson last year, but that’s how much sweeter it is."

Phil Mickelson was defending his title and bidding to win a fourth PGA Tour Champions title in his last five starts, but he had a week to forget and finished 14 shots off the pace.

Steve Flesch held a two-shot lead heading into the final round but had to settle for a solo third two shots back after a 73.

Langer now extends his lead atop the Charles Schwap Cup, the season-long points race that extends to the beginning of 2020 following the pandemic.

With just two more events left on the schedule, Langer is now seeking to win the Charles Schwab Cup for a record sixth time. Nobody else has won it more than twice.

"The Schwab Cup is the next goal as it has been for a year and a half or two years now," said Langer.

"We're a little bit closer, but it's not over yet."

Langer, however, has 11 senior major wins as opposed to Irwin's seven.

NOW WATCH: HOW DOES THIS PUTT NOT GO IN THE HOLE?!

Golf news
DEBATE: GolfMagic readers discuss their favourite major on Facebook & Instagram
Golf news
Golfer pauses longer than Hideki Matsuyama then SMASHES HIS TEETH with tee shot
Golf news
Could you pull off this AMAZING recovery shot through the trees?
Course news
Golf courses SHUT across United Kingdom due to Storm Arwen and DEEP SNOW
Golf news
WATCH: Could you play the Phil Mickelson BACKWARD FLOP SHOT like this?

The Masters
GOLF QUIZ: Can you name the last 30 winners of The Masters?
PGA Tour
Tiger Woods' tournament is this week in Albany, here's all YOU need to know
PGA Tour
Brooks Koepka attends college basketball with Boxing legend Floyd Mayweather
Golf news
Golf rules: Are you allowed to BALANCE on one foot then walk through the stroke?
Golf news
Golf rules: Young player does FULL 360 and smashes head, but what happens next?