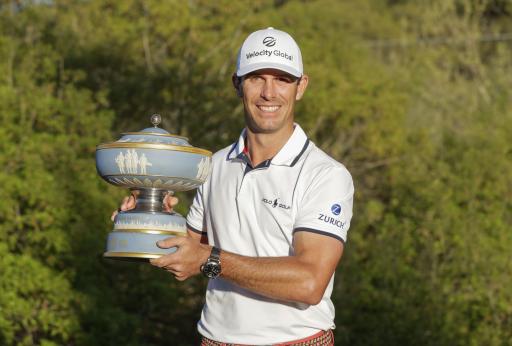 The American is a big fan of the Premier League club and receving a congratulatory message from Noble was one of the "coolest things" for the former FedExCup winner.

"We're having a hell of a season, incredible after almost being relegated last year, and to have a chance to make the Champions League is truly amazing," Horschel told Sky Sports News.

"Mark Noble sent me a text. I've never met Mark, but he got my number from Francesco Molinari and sent me a text yesterday. That was one of the coolest things, and we were texting back and forth.

"I'm excited to see what the last part of the season has in store for West Ham. I think David Moyes has done an unbelievable job, and Jesse Lingard has been a key addition to the team. They had a strong team already, but he's added a little extra spark, and we all know how good Michail Antonio is.

"It's been amazing to see what the team has achieved. I don't know how the voting process goes, but in my opinion David Moyes should be Manager of the Year."

The WGC Match Play final between Horschel and Scottie Scheffler was slammed by golf fans due to the slow play from both players, although Scheffler was the main culprit.

Following the recent social media reaction that the slow-paced final caused, Horschel took the chance to apologise to golf fans and admitted he was slower than usual, but it's not something he is typically known for and will make sure it doesn't happen again.

"It did feel slow," he added. "I'm not a slow player and I've never been called a slow player, but I understand that the final was a slow round of golf. The conditions were tough, with the wind blowing all over the place, so it was sometimes tough to figure out what we wanted to do.

"The majority of the time, when it was my turn I was ready to hit. But my pre-shot routine was longer than it normally is. I've been working on some stuff and I was uncomfortable with the feeling I had over the golf ball, so I had to back off a couple of times.

"I apologise that it took so long, but I'm really not a slow player. I read what Colin Montgomerie was saying, about all the guys having yardage books and using the green books to line up putts. But I don't carry a yardage book, and I haven't for four years. And I never used a greens book to line up my putts.

"Obviously it was a long round of golf, and with only two matches going on it's going to look like it takes a lot longer. That's an unfortunate situation as the TV has nothing else to fill when we're not playing shots. I understand it took longer, but the conditions were really tough and I don't think the TV really showed just how hard it was blowing out there.

"We were grinding out pars, so it wasn't like we were hitting it close. We were hitting it to 30 or 40 feet and trying to two-putt for par, and the greens are very similar to Augusta, although not quite as severe.

"So I do apologise that the round took longer. I'm not a fan of slow play and everyone knows I'm not a slow player. I guarantee you that, next time I'm in the final group, I won't be taking as much time as I did on Sunday. I'm very much a feel player, and I'm a big believer in not taking a lot of time over the golf ball, making a decision and sticking to it."