After footage of Brooks Koepka being visibly annoyed by Bryson DeChambeau was released earlier this week, the tension between the pair has mounted. 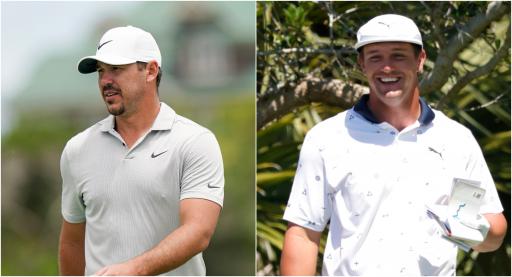 The war of words between Brooks Koepka and Bryson DeChambeau has continued to catch fire, with their latest exchange happening on Twitter.

It was announced yesterday that Phil Mickelson and NFL's Tom Brady would be teaming up against DeChambeau and NFL's Aaron Rodgers in the fourth edition of 'The Match.'

When Koepka heard the news, he went on Twitter and posted a tweet simply saying "Sorry bro" while tagging Aaron Rodgers. It is clear that the four-time major champion feels sorry for Rodgers that he has to be on DeChambeau's team.

@BKoepka It’s nice to be living rent free in your head!

The big-hitting American wasted no time in providing a response to Koepka. The 27-year-old replied with a tweet saying "It's nice to be living rent-free in your head!"

This was not the end of the exchange as Koepka replied again, this time with a video of DeChambeau hitting a drive during a practice round at the PGA Championship at Kiawah Island.

After he hit the shot, a fan shouted "Alright Brooksy". The 2020 US Open champion didn't like this and responded by saying "Whoever is calling me Brooksy needs to get out of here."

This exchange of words on Twitter is the first time the pair have directly communicated on a public platform since the video of Koepka's interview was posted online.

Although people have tried to work out what DeChambeau actually said to make Koepka so annoyed, it is not clear enough to summarise.

It can sometimes be unpleasant to see two talented players on the PGA Tour share such a dislike for each other, but you cannot deny that it has provided great entertainment for golf fans everywhere.