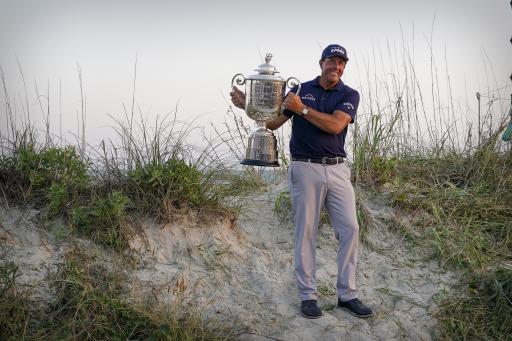 Brooks Koepka provoked a number of responses when he tweeted NFL's Aaron Rodgers yesterday, including a reply from the history-making PGA champion Phil Mickelson.

After becoming the oldest ever winner of a men's major championship, a video was released of Koepka being visibly frustrated by something that Bryson DeChambeau said behind his back during an interview.

There was an exchange of comments and tweets on the internet yesterday between the pair and Mickelson also chimed in with a great response of his own.

I feel like I’m in the middle of something and should step aside. (Except they want the CURRENT PGA champ:)

"I feel like I'm in the middle of something and should step aside. (Except they want the CURRENT PGA champ:)", tweeted Mickelson, with reference to The Match which is set to take place in July.

The six-time major winner said that he should pull out of the match, which he is playing in with Tom Brady against DeChambeau and Rodgers, but joked that they want the conqueror of Kiawah Island to play.

We don't think that Koepka will be that irked by Mickelson's comment. As we heard in his victory speech on Sunday, there is a lot of respect between Mickelson and Koepka as competitors.

The pair were in the final group together during the final round at the PGA Championship, but when fans swarmed down the fairway on the final hole, Koepka was not happy with the lack of consideration for himself and his caddy.

The 50-year-old Mickelson has played in each of the previous three editions of The Match, having started the popular series with Tiger Woods in 2018 when the pair played for $9 million.