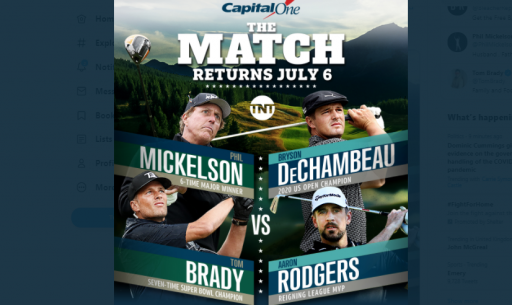 Phil Mickelson and Tom Brady will square off against Bryson DeChambeau and Aaron Rodgers in the fourth edition of 'The Match' on Tuesday July 6 at the stunning Moonlight Basin in Big Sky, Montana.

Mickelson teamed up with NFL legend Brady in 'The Match 2" when losing to Tiger Woods and Peyton Manning by 1 hole, while DeChambeau and another NFL legend in Rodgers form a completely new team.

PGA champ and Super Bowl MVP vs. US Open champ and NFL MVP @PhilMickelson and @TomBrady vs. @b_dechambeau and @AaronRodgers12 is gonna be wild #CapitalOnesTheMatch returns July 6 on TNT pic.twitter.com/h644kNWMRX

Rodgers is said to play off a 4 handicap, while Brady is reportedly off 8.

According to a release from Turner Sports, in addition to live televised coverage on TNT, interactive social and digital content will be available on Bleacher Report and House of Highlights leading up to and during the event.

Live event coverage airing on TNT will once again feature open mics throughout the entire competition, including the capability to communicate directly with other golfers and the broadcast commentators.

The match will also see donations made to Feeding America and additional charitable beneficiaries.

Can Tom Brady bring this against Aaron Rodgers at #CapitalOnesTheMatch? pic.twitter.com/k4Au3SwP1m

Mickelson defeated Woods in the very first 'Match' where he won a whopping $9 million after winning on the fourth extra hole.

He then joined Brady for 'Match 2' when losing to Woods and Manning, but he then got his own back on Manning and his partner Steph Curry in 'Match III' when teaming up with Charles Barkley to victory.

The announcement for 'Match 4' — sponsored by Capital One and again be broadcast on TNT — comes just days after Mickelson became the oldest major champion in history when landing his sixth career major win at the US PGA Championship at Kiawah Island.

NEXT PAGE: GOLF PUNTER WINS $300,000 ON MICKELSON WINNING THE US PGA