Brooks Koepka and his fiancée Jena Sims got in the festive spirit on holiday and took to the slopes in Montana. 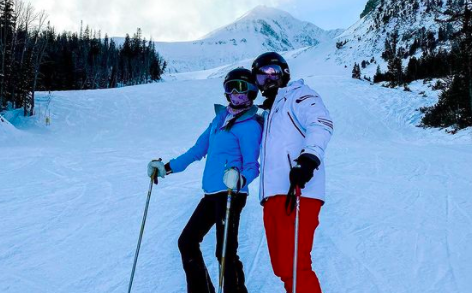 Brooks Koepka and Jena Sims are soon to be married and just before they spend another Christmas together, they took to the slopes in Big Sky, Montana.

The popular skiing venue on the Rocky Mountains of southern Montana looks like a picturesque and quite simply stunning place to go on holiday.

Koepka, who recently finished tied ninth at the Hero World Challenge hosted by Tiger Woods, has very much earned a luxury holiday after his brilliant year on the PGA Tour.

The four-time major champion won the Waste Management Phoenix Open and came in the top-10 at three of the four majors. He also beat his old foe Bryson DeChambeau at The Match in Las Vegas.

He and Sims got engaged in April, having started dating in 2017. The happy couple have already built up a strong memory bank and it looks as though Big Sky won't be forgotten any time soon.

As well as skiing, the site is also known for downhill mountain bike trails. Just southeast of the town, you can find Yellowstone National Park.

At Big Sky, there are 5,850 skiable acres as well as 39 lifts for the skiers to use. There is also one lone peak so it is fair to say that Koepka and Sims have chosen the perfect spot for their holiday.

Sims posted pictures on her Instagram page of the mountains and of her and her eight-time PGA Tour-winning partner at the top of the slopes.

Earlier in the 2021 PGA Tour season, Koepka suffered a knee injury and often had to squat and read putts in a different way as a result. He also injured his wrist at the end of the season.

Let's hope that skiing brings no such perils to his body again and we can look forward to seeing the 31-year-old back in 2022.

NEXT PAGE: HERE'S WHY KEVIN NA GOT SO EMOTIONAL DURING HIS QBE SHOOTOUT VICTORY INTERVIEW