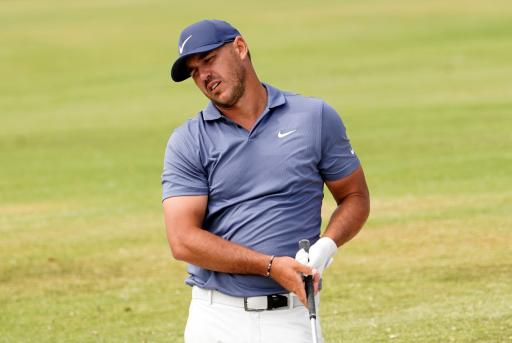 A video has gone viral this weekend of Brooks Koepka responding to a golf fan while walking down the fairway at this week's Travelers Championship, questioning how the punter could "only" have stuck $100 on him winning the tournament.

As it's turned out so far this week at TPC River Highlands, it's a good job the golf fan only stuck $100 of his hard-earned on the four-time major champion lifting the trophy on Sunday.

Some golf fans on social media have questioned why you would even brag about a ton bet on someone.

"If you're gonna holler at an athlete and boast about ho much you're betting on them, it better be a rack," said one fan. "Minimum. If not, keep quiet. Ha."

One golf fan said: "We all know Brooks can't play regular events. Man only turns up at the majors."

Following rounds of 69 and 67, Koepka added a third-round 1-under 69 on Saturday to leave him just inside the top 30 and some way off the pace heading into the final round.

For those wondering, his good chum Bryson DeChambeau is a couple of shots better off and so their much-anticipated pairing will have to wait for another time.

NEXT PAGE: BROOKS KOEPKA REVEALS THE ORIGIN OF HIS FEUD WITH BRYSON DECHAMBEAU