Tiger Woods: Where does he go from here? The Masters or St Andrews?

Woods will no doubt be buoyed by his performance at the PNC Championship. 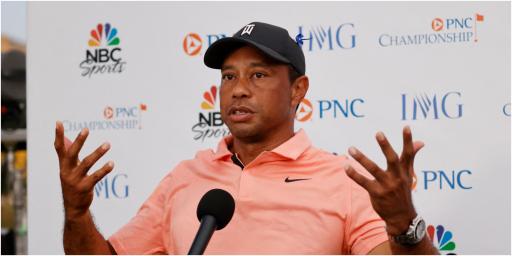 What next for Tiger Woods after his display at the PNC Championship alongside his son Charlie?

That is the question that will be on everybody's lips after seeing Woods, 45, play what he described as "slappy cuts" in Orlando.

But something happened on Sunday. Those competitive juices, as he said afterwards, aren't going away.

There was a pep in his step. Charlie was rolling in birdies and getting his approaches pin high. Dad was doing the same thing.

Related: What you may have missed from the 'making progress' swing video

The beaming smile that we saw for the entirety of the week at the Ritz-Carlton Golf Club was replaced with a steely glare.

The cat in his natural habitat, honing in on a win even if this tournament was described as a "silly season" event.

Woods and his son wanted to win. Desperately. Woods didn't exactly hold back with his drives, he even launched one past Justin Thomas.

Some hit and giggle that. His speed was noticeably up there, too. There were a few errant shots, but still, he looked very good.

Last week was always going to be testing for Woods. We don't know how much golf he has truly played.

But still, he is not yet able to walk 18 holes unassisted and therefore we should probably pour cold water on the Masters talk.

Perhaps The 2023 Masters should be the real goal and anything that happens in between is a welcome bonus.

Related: What clubs did Tiger Woods use at the PNC Championship?

If he plays one event on the PGA Tour next year we should consider it pretty much miraculous. But no days off Tiger won't accept that.

Justin Thomas remarked: "At least from my perspective, it looked like a lot of the moves and everything were there."

I can't disagree with that. Tiger's strengths has always been his iron play and the ability to shape the ball.

We saw an awful lot of classic Tiger shots last weekend. It wasn't as if he was playing one stock shot to simply "get it out there".

Commentators on both sides of the pond remarked that Woods' driver swing is markedly more flat-footed.

But is this even a problem? Another one of his strengths is the ability that he has with his hands.

He'll create speed with his arms even if he still can't use the ground to generate as much power from the floor up.

I'm sure everyone remembers that famous clip where he bamboozled Jason Day with how he feels shots.

Can you explain things just like a normal person?

Related: The odds of Tiger Woods winning the 2022 Masters

Ultimately what it comes down to is whether Woods can walk for five straight days and the prep needed for major tournaments.

We've all heard the stories of Tiger up at 4am stretching regardless of his tee time. That drive will never go away.

Everything else is still there. The feel, the hands, the touch, the vision, the creativity.

Woods has proven time and time again that he is more driven than any other golfer. Five back surgeries, five knee surgeries. Still here.

What I loved about when he was questioned about his comeback is that he rejected the idea of playing in a golf cart.

"That's not who I am," Woods told the media. There are zero handouts for Woods. There are also no days off.

We are unlikely to hear from Woods for a while now. He'll spend Christmas with his family, then it's back to rehab.

Hopefully, we can see him play again next year.

Related: Tiger Woods is teaching his son like Earl Woods taught him

Next page: The best shot tracers from Tiger and Charlie

Tiger Woods
masters
comeback
car crash
St Andrews
charlie woods
Previous
PlayMoreGolf to offer Boxing Day membership packages for 2022
Next
When are we likely to see Tiger Woods back on the PGA Tour?

US PGA
Rory McIlroy gives hilarious answer to question after setting US PGA lead
US PGA
Tiger Woods after Round 1 of US PGA: "Playing that kind of golf is gone"
US PGA
Big names get off to TORRID START at PGA Championship at Southern Hills
US PGA
US PGA R1: Exhausted Tiger Woods struggles to keep up with Rory McIlroy
US PGA
"What is he thinking?!" Tyrrell Hatton DENTS GREEN at PGA Championship