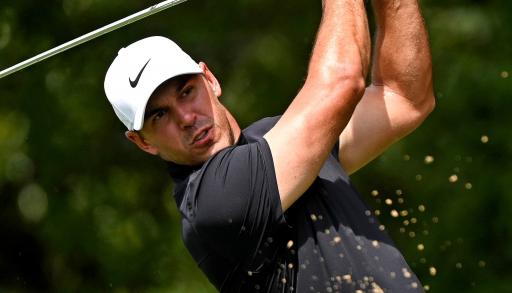 Brooks Koepka turned heads in the first round of the Tour Championship on the PGA Tour on Thursday.

Koepka rocked up at the first tee in Atlanta yesterday wearing a short-sleeve black turtleneck, drawing comparisons to Tiger Woods.

Koepka's shirt is made by Nike and is a collaboration with global superstar Drake and his sub-label NOCTA.

Fans reacted on social media in typical fashion, with some suggesting that perhaps Bryson DeChambeau did in fact win the "war".

He is not the first superstar this week to draw attention from his appearance.

One fan suggested DJ without a beard is like a lone ranger without a mask and others have called on him to grow it out again.

Koepka arrived at the Tour Championship with his fiancee Jena Sims also wearing black with their dog as well.

He is currently in a tie for 10th at East Lake after shooting a 3-under-par, giving him a score of 5-under overall.

Patrick Cantlay is eight shots ahead of him at 13-under.

NEXT PAGE: PATRICK REED: I WAS BATTLING FOR MY LIFE