Jon Rahm may be the US Open champion and World No. 1 golfer, but his wife Kelley Cahill was also a very capable athlete. 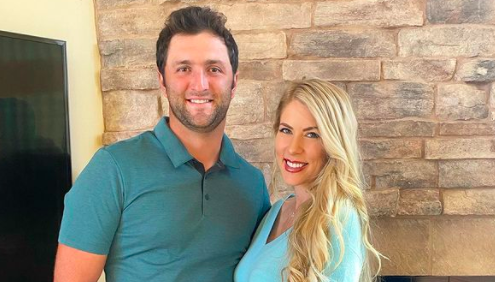 It really has been a fantastic and memorable year for Jon Rahm and his wife Kelley Cahill both on and off the golf course.

He became the US Open champion in June after securing a dramatic victory at Torrey Pines. This was his sixth win on the PGA Tour and he has now won an event every year since 2017.

He has also become the World No. 1 golfer after knocking Dustin Johnson off his perch earlier in the season and he is in a great position to win his first FedEx Cup this week at the Tour Championship.

This is just on the course. Off the course, he and his wife Kelley began their family earlier in 2021 after having their first child together.

There was a worry that the Spaniard could miss playing at The Masters due to the birth of their son, Kepa Cahill Rahm, but luckily there was no such issue and the pair were delighted to introduce their child to the world.

Rahm and Kelley have been together since college, where they both attended Arizona State University in America.

The pair lived together for two happy years and in December 2019, they got married in Bilbao, Spain which is near to Rahm's home town of Barika.

At university, Kelley was an impressive athlete. She competed as a javelin thrower and she was also a very good tennis player.

It is no surprise that as they are into their sport and competition, both of them are very competitive and they have previously played a tennis match against each other.

Kelley has been extremely supportive of Rahm on the PGA and European Tours, as we saw this when she was at Liberty National with little Kepa, watching him play in the Northern Trust.

It has been great to see the pair celebrate many victories, such as when Rahm won his first major title at the US Open, and we all look forward to seeing more of them in the coming years.