It is always great to hear players and their caddies discuss shots in front of the cameras, which is what Jordan Spieth and Michael Greller did yesterday at the Charles Schwab Challenge. 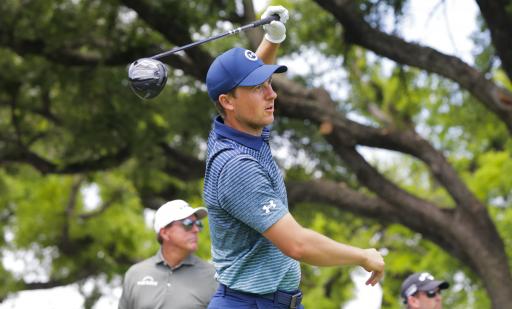 It is always a pleasure for golf fans to listen to players and their caddies on the PGA Tour discuss shots and show the processes that go into each club decision.

For the most part, the players discuss shots in a way that amateur golfers can't relate, however it is always fascinating to watch these valuable insights.

In the middle of the 18th fairway on Friday, Jordan Spieth had 102 yards to the hole after hitting his drive 311 yards down the fairway on this 444-yard par-4.

Spieth and his caddie Michael Greller decided on a club, but the 27-year-old "bladed it" to the back-right of the green, leaving himself with a tricky up-and-down for a par.

To his annoyance, the three-time major champion walked up the fairway saying to Greller that he should trust himself to take one club more and hit a softer shot, as opposed to going hard with a more lofted club.

The World No. 28 recovered well on his final hole on Friday by making a par to finish with a 4-under-par 66, leading the tournament by one shot on 11-under-par.

Spieth is currently bogey-free at the Charles Schwab Challenge and he will tee it up in the final group with Jason Kokrak on Saturday at Colonial Country Club in Texas.

"Wow, what an insight to how these guys think and go about things," one fan said.

"This is soooooo good. Spieth is all of us amateurs muttering to ourselves after a laughable golf shot. How is Greller not laughing at this self-deprecation??" one fan commented.

"If I talked about every awful shot, my rounds would 8 hours long," another fan said.

"Greller has the ability to tune into a different station. Vital survival skill," another fan commented.