Bryson DeChambeau propelled himself into the lead at the BMW Championship with a fantastic score of 60 on day two at Caves Valley Golf Club. 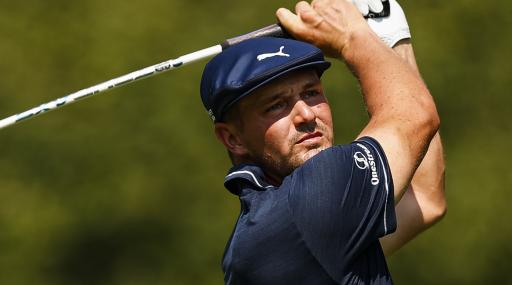 Bryson DeChambeau missed a putt of just over six feet for an amazing round of 59 on the second day at the BMW Championship.

DeChambeau began the day four shots behind the leaders Jon Rahm, Sam Burns and Rory McIlroy on 4-under-par, but the big-hitting American came out fighting with a score of 60 on Friday in Maryland.

The eight-time PGA Tour winner then made three more birdies in his last nine holes and another eagle at the par-5 16th hole to go 12-under-par after 16 holes.

The former US Open champion needed one more birdie in his final two holes to join the exclusive club of players who have shot 59 on the PGA Tour at Caves Valley Golf Club.

DeChambeau hit a pinpoint approach into the 18th hole but he agonisingly missed the 6-foot putt to miss out on the 59. He tapped in for an amazing round of 60, posting 12-under-par to hold the lead at the BMW Championship.

DeChambeau finished on 16-under-par for the tournament and held a one-shot lead over Patrick Cantlay, when play was suspended in Maryland as a result of inclement weather.

"I hit it on the line, just misread it. We played it two and a half, three inches out, and it clearly didn't break that much, but I had good speed on it and I'll go look afterwards and see if I pulled it or not and work on ways to mitigate that," DeChambeau said after his round.

NEXT PAGE: DEAN BURMESTER SHOOTS 65 TO REACH TOP OF THE PILE IN OMEGA EUROPEAN MASTERS