Jon Rahm is one shot behind Bryson DeChambeau with three holes of his second round left after play was suspended due to inclement weather. 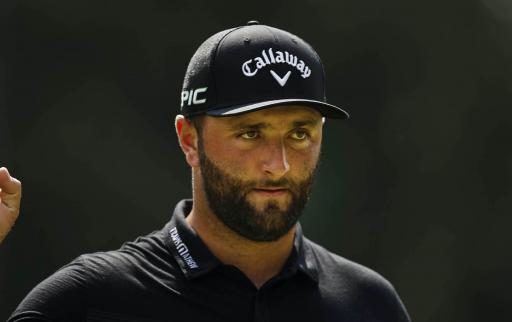 Jon Rahm was chasing down the leader Bryson DeChambeau in the second round of the BMW Championship, before darkness halted play for the day in Maryland.

After DeChambeau came agonisingly close to a 59, missing a 6-foot putt on the 18th green, he propelled himself to 16-under-par to lead the way by one shot ahead of Patrick Cantlay at Caves Valley Golf Club.

The big-hitting American made eight birdies and two eagles in 16 holes to go 12-under-par for his round, but he couldn't find the magic birdie in his last two holes. Nonetheless, it was his best-ever round on the PGA Tour.

Rahm got to work with three birdies in his first seven holes, but it was on the back nine where the Spaniard ignited his challenge to win back-to-back BMW Championship titles.

Is it enough? It's most definitely enough.@JonRahmPGA is pouring in the putts and within 1 of the lead. pic.twitter.com/g8gg9MoQZ5

Darkness stopped Rahm in his tracks and many other players too. The ones who did not finish their rounds are set to complete them at 8.30 am local time on Saturday morning.

Rahm joined Cantlay to sit one shot behind DeChambeau, while Sungjae Im and Sergio Garcia are four shots behind on 12-under-par.

Rory McIlroy, who shared the overnight lead with Rahm and American Sam Burns, carded a 2-under-par 70 on Friday, but he fell six shots behind the leader on 10-under-par.

Players such as Cameron Smith, Phil Mickelson and Abraham Ancer also need to finish off their second rounds on Saturday morning.