Bryson DeChambeau "offered" $135million to be face of rival league

Bryson DeChambeau is said to have been offered the staggering sum to be the poster boy of the Saudi Golf League. 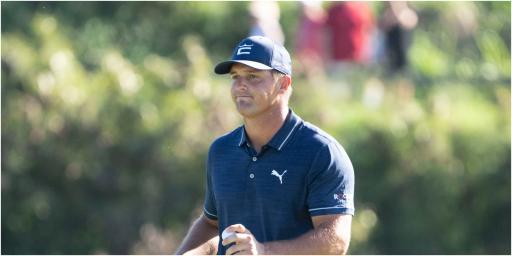 Bryson DeChambeau has reportedly been offered $135million to be the face of the proposed Saudi Golf League.

DeChambeau is currently in Saudi Arabia for the controversial Saudi International and it is understood his appearance fee alone is huge.

And according to Sportsmail, DeChambeau has been offered the huge sum to be the figurehead of the proposed circuit.

This week a number of players fielded questions (or didn't) about the future of golf and being offered money to change their allegiances.

Dustin Johnson was first up and alluded to signing a non-disclosure agreement. He wouldn't answer when asked about Ian Poulter's "offer".

He joked that - hypothetically - if he was offered some money for this new circuit, then his offer looked "a lot different".

Lee Westwood was next up and was coy on the subject, suggesting he can't talk about the topic having signed an NDA.

Then Phil Mickelson chimed in and told the world about the PGA Tour's "obnoxious greed".

Mickelson confirmed that he believed that every single player in the world's top 100 has been contacted about this venture.

If true, and DeChambeau were to accept the offer, then it would see him take more than four times his current career earnings.

DeChambeau, 28, is currently ranked number nine in the world. He has won eight times on the PGA Tour and won his first major in 2020.

Greg Norman, who is the CEO of LIV Golf Investments who are pumping money into the Asian Tour, spoke about this topic this week.

In a press conference that lasted more than an hour, Norman explained that everything he is doing is for "the good of the game".

He said "shame on you" to those speculating about his motives and suggested he wants to work side by side with golf tours.

Norman also announced a 10-event international series, with one tournament being played at Centurion Club in London.

A number of players this week have reportedly been flown in on private jets and getting huge appearance fees for competing.

It is seen as a controversial tournament because many view it as an attempt by the Kingdom to sportswash its human rights abuses.

Of the top 50 golfers in the world, 21 are playing in Saudi Arabia this week. Some PGA Tour stars chose this over playing at Pebble Beach.

One PGA Tour player, Jason Kokrak, admitted "cash is king" and wanted to earn as much money as he could before retiring.

Others have suggested they are not politicians, want to grow the game and insist they just want to compete against the best.

Sportsmail have quoted a source suggesting that there are "a lot of conversations people don't know about".

There is reportedly a huge announcement coming. DeChambeau, undoubtedly, would be a big draw and it would turn heads.

This tournament is not sanctioned by the DP World Tour and a number of PGA Tour players needed passes to play in this event.

That is on the understanding that they support the Pebble Beach AT&T Pro-Am going forward, which is being played this week.