Bryson DeChambeau SNAPS at a golf fan for calling him 'BROOKSY' on PGA Tour!

Bryson DeChambeau was subjected to another fan shouting 'Brooksy' at him during the final round of the WGC-FedEx St. Jude Invitational on Sunday. 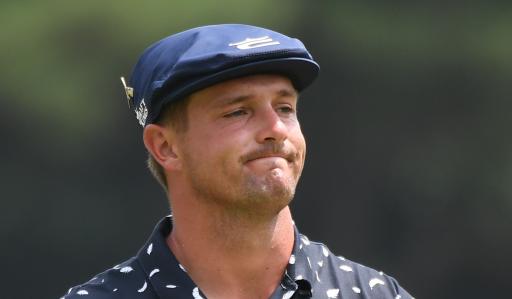 Bryson DeChambeau responded to a fan who called him 'Brooksy' during the final round of the WGC-FedEx St. Jude Invitational on Sunday.

Golf fans have been shouting 'Brooksy' at the big-hitting American for a number of weeks now on the PGA Tour, with the chants mainly originating from the Memorial Tournament in June.

Unfortunately, the shouts have continued and while DeChambeau was going through his back-nine collapse at TPC Southwind, his patience finally snapped on the 17th hole.

A female fan shouted 'Brooksy' at the 2020 US Open champion on his 71st hole of the week. DeChambeau has previously said that he tries to ignore and block out this sort of chant, but on this occasion, he felt he had to respond.

The feud between DeChambeau and Brooks Koepka has entertained and excited golf fans for the majority of 2021, with both players being arguably the most talked-about golfers on tour.

'Good one!" replied DeChambeau. It is fair to say that the 27-year-old is entitled to reply to these calls every now and then. It happens so frequently and he must find it hard to keep bottling up his urges to fire back.

The shout of 'Brooksy' came at a point in the round where DeChambeau was probably at boiling point. At that stage, he was 5-over-par on his back nine and he had fallen to 13-under-par.

The eight-time PGA Tour winner made another bogey on his final hole to shoot 4-over-par on Sunday and to finish on 12-under-par, four shots behind the eventual winner Abraham Ancer and his playoff opponents Hideki Matsuyama and Sam Burns.