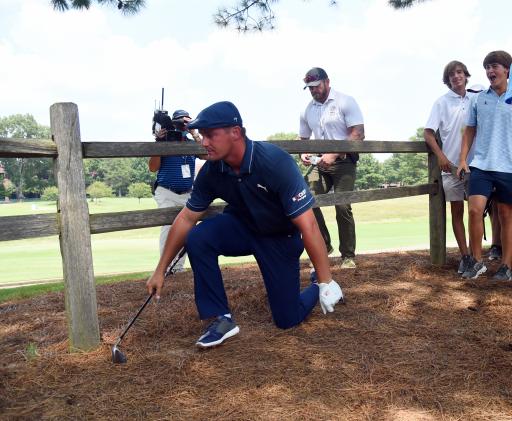 Bryson DeChambeau received an extremely lucky break during the final round at the WGC-FedEx St. Jude Invitational on Sunday, which confused some golf fans on social media.

Although the big-hitting American couldn't secure his ninth PGA Tour win in Memphis, he was helped out by the rules of golf and PGA Tour referee Ken Tackett on the par-4 6th hole at TPC Southwind.

DeChambeau had sliced his driver to the righthand side of the hole and his ball stopped under a fence and looked as though it finished out-of-bounds.

But Tackett ruled that the 2020 US Open champion's ball was in bounds and he could play on. After this was made clear, DeChambeau had to stand on a cart path to take his next shot.

Due to his stance being on the cart path, DeChambeau was able to take full relief and drop his ball to the left of the path, which gave him a route to the green underneath some trees.

The older I get, the less I understand the rules of golf.

Although he went from a near out-of-bounds drive under a fence to a realistic chance of hitting the green, DeChambeau clipped the trees with his second shot and went on to make a bogey.

There were some golf fans who were confused by the ruling and felt that DeChambeau should not have been given such a beneficial break by moving his ball to the left of the cart path.

"Well, it's because the players at this level, they're so good, he could have easily stood and played the golf ball from underneath the fence and advanced it probably a considerable way," explained Tackett after the ruling was made.

"In doing so, he was standing on the cart path, so he got relief from the cart path. Even though it doesn't seem obvious, it is something we see often where the players will play from the other side of the fence, you know, into the fairway often.

The 6th hole was a wild ride for Bryson DeChambeau.

"So then he gets relief for the cart path. His nearest point of relief has to be complete relief and it has to be inbounds, so the only place that was was on the opposite side of the cart path."

The 27-year-old held every chance of landing a first career WGC title when moving into a share of the lead early on in the front nine on Sunday, but his issues on the 6th hole were a sign of things to come.

DeChambeau made a triple-bogey on the par-3 11th hole and three other bogeys on the back nine to shoot 4-over-par, finishing in a tie for eighth place.

Some golf fans posted their comments on social media about the out-of-bounds ruling:

Wow sometimes the rules of golf baffle me. Bryson just got the break of a lifetime with a free drop when his ball was literally an inch from OB. Nuts. But we will see if the saved 2 shots will matter at the end of the day. @SportsLine

What’s going on with Bryson here? How can he get a free drop from an OB fence? And if it not an OB fence, where was the line?

Utterly absurd Bryson gets free relief. Fence keeps his ball from going OB in the woods and he gets to drop out with a clear line of sight.

NEXT PAGE: IS BRYSON DECHAMBEAU THE ONLY PLAYER NOT TO SHOUT 'FORE', OR ARE WE ALL GUILTY?