Butch: "If Tiger doesn't leave me alone, I'm going to hit him with his club"

Throwback to this classic Tiger Woods and Butch Harmon clip from Kapalua in 2000. 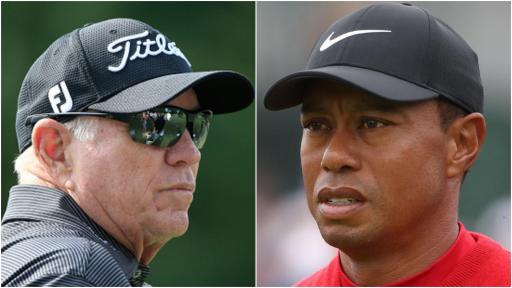 The Sentry Tournament of Champions marks the first tournament of 2022 on the PGA Tour and once again it will tee up at the famous Plantation Course at Kapalua in Hawaii.

Tiger Woods might not be in action at the 2021 season winners-only tournament but the former World No.1 did taste victory here twice in 1997 and 2000, back when the tournament was known as the Mercedes Championships.

Skratch threw it back to the latter of those victory years on their social media channels today, posting a hilarious video of Woods on the range that week alongside his long-time coach Butch Harmon.

In a video that many of us had never previously seen before, Harmon was speaking to ESPN about the changes his man Woods had been making to his golf swing in a bid to take his game to the next level.

Woods, who defeated Ernie Els in a playoff that week, can be seen joking in the background while Harmon talks to ESPN.

The year of 2000 proved to be Woods' most successful of his career as he won an incredible nine times.

While we might see Woods joke a bit more with the media today, we rarely saw it back in his prime - which makes this video even more refreshing to see.

"He's gotten so much stronger, which he needed to do to make the changes he wanted to make," Harmon told ESPN during the week of the 2000 tournament.

"These really weren't necessarily all my idea. This was Tiger and I's idea.

"And if Tiger doesn't leave me alone, I'm going to hit him with his club."

Harmon then added: "But you know, if you look at his golf swing now, his arms and body match up so much better than they did before.

"He's got the club in a much better position at the top.

"He used to get his right arm away behind his body at the top of his swing and then get in a stuck position coming down.

"And we worked really hard to get the right elbow where it's pretty much in the middle of the body at the top of the swing.

"Then he's really worked hard to get his arms out in front of his body on the way down.

"We all know what kind of body speed he's always had, and it was important to match up the arms and the body together.