Boyd Summerhays put it down to squeaky shoes, but Tony Finau's caddie knew what he was doing. 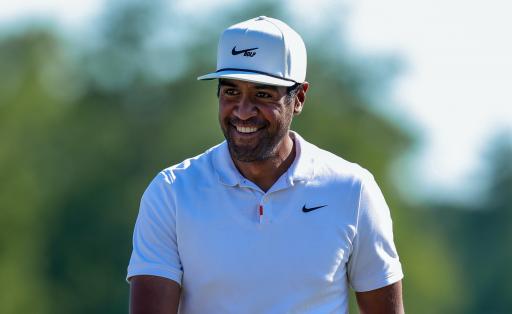 Tony Finau is one of many PGA Tour superstars teeing it up at the Sentry Tournament of Champions this week at Kapalua Resort in Hawaii.

The two-time PGA Tour winner is making his first appearance since finishing tied seventh at the Hero World Challenge in December, an event hosted by Tiger Woods.

Before that, he missed the cut at the Hewlett Packard Enterprise Houston Open and finished down the field in Mayakoba and the CJ Cup.

As ever, it appears the 32-year-old has had a laid back and relaxed preparation for his week in Kapalua and he has had some fun with his coach Boyd Summerhays and caddie Mark Urbanek.

RELATED: THE BEST GOLF SHOE DEALS TO TEE OFF YOUR 2022 SEASON!

Finau posted a hysterical video on his Instagram page of Urbanek letting loose in the more vulgar sense of the phrase, just after Finau hit an approach to one of the greens at the Plantation Course.

After Urbanek broke wind, Summerhays comically put the noise down to squeaky shoes and congratulated Urbanek on his efforts. Finau didn't seem to hear or recognise the noise at the time.

Finau is set to tee it up with fellow big hitter and Ryder Cup teammate Bryson DeChambeau in the first round of the Sentry Tournament of Champions.

Finau had a breakthrough moment at the Northern Trust at the end of the 2021 season as it was his first win for five years. He will hope he can win more frequently on the PGA Tour in this new year.

NEXT PAGE: BUTCH: "IF TIGER DOESN'T LEAVE ME ALONE, I'M GOING TO HIT HIM WITH HIS CLUB"