Cameron Smith made a double-bogey on the par-4 5th hole at Liberty National after he had taken the solo lead, but it could've been so much worse. 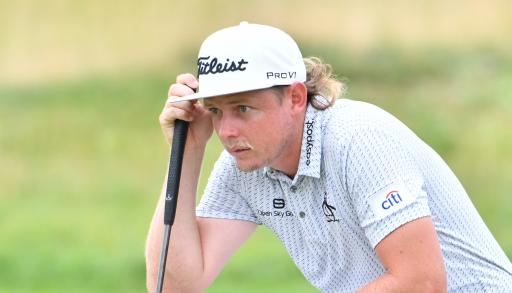 Cameron Smith managed to save a double-bogey on the par-4 5th hole at the Northern Trust, which could have been a lot more damaging than first thought.

Smith began the day level with Jon Rahm on 16-under-par and the Australian moved ahead of the Spaniard with a birdie on the par-3 2nd hole.

The World No. 28 arrived on the 5th tee box with a one-shot lead, but he hooked his drive on this 428-yard hole into the middle of the large lake, meaning he had to take a drop.

Smith then sliced what was his third shot to the right of the fairway and he left himself with a very tough fourth shot to the green, which was blocked by a small tree.

Cameron Smith records a double bogey at the 5th.

His first bogey or worse in the last 29 holes. pic.twitter.com/cd6ImHVEwC

He then hit a wild fourth shot into the green which went left and long of the target. His ball was inches from falling into the water again, but it managed to stay above ground underneath some more trees.

The three-time PGA Tour winner hit a solid pitch to about 12 feet from the hole and with a bit of luck, his putt just rolled enough times to fall into the back of the cup.

Smith did very well to make a six, which dropped him back to 15-under-par for the tournament and at that stage, it put him one shot behind new leaders Jon Rahm and Tony Finau.

The Northern Trust was forced into a Monday finish as Tropical Storm Henri swept through New Jersey at the weekend, meaning that there could be no golf played on Sunday.

NEXT PAGE: DID YOU KNOW THIS RULE ABOUT CARRYING A CLUB THAT CAN CHANGE IN LOFT?