The field are set to tee off at Liberty National on Monday at 11.30 am local time and it has been announced that no spectators will be present. 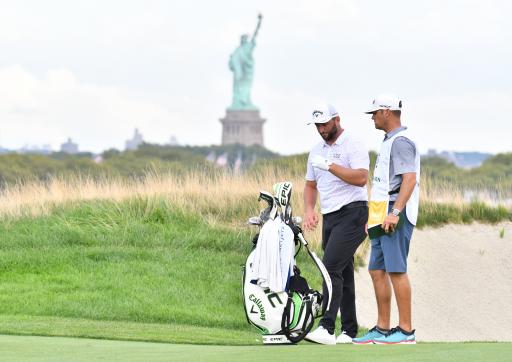 After hours of delays and speculation, the Northern Trust is set to resume play at 11.30 am local time at Liberty National after the inclement weather finally subsided.

Play was completely cancelled on Sunday as a result of Tropical Storm Henri and the tee times on Monday morning were again delayed further due to the weather failing to clear.

However, it was announced earlier today that the event would restart at 11.30 am in Jersey City, New Jersey, which is 4.30 pm in British Summer Time.

The PGA Tour had originally planned to start the final round of the Northern Trust at 7.30 am, but the bad weather conditions and the state of the course forced a four-hour delay.

Players will start from both the first hole and the 10th hole with Jordan Spieth and Rory McIlroy set to be part of the opening groups to hit their first shots at the tournament since Saturday.

The final round of @TheNTGolf has been delayed an additional hour and is now scheduled to begin at 11:30 a.m. ET.

Jon Rahm and Cameron Smith lead the way on 16-under-par and they will tee off from the first hole alongside Erik van Rooyen at 1.42 pm local time, which is 6.42 pm in Britain.

If the weather continues to stay dry, we are in for an exciting final round to the first leg of the FedEx Cup Playoffs. However, it was also announced that there will be no spectators allowed into the grounds for Monday's final round.

Due to many of the walkways and cart paths being flooded with rain, the PGA Tour have decided that the safest way forward was to contest the final round without spectators.

NEXT PAGE: PROJECTED FEDEX CUP STANDINGS: WHO IS IN AND WHO IS OUT AT THE NORTHERN TRUST?