WATCH: Viktor Hovland BREAKS his putter and has to putt with his WEDGE!

Hovland breaks his putter after thumping it against his golf bag - and has to put with his wedge for the rest of the round! 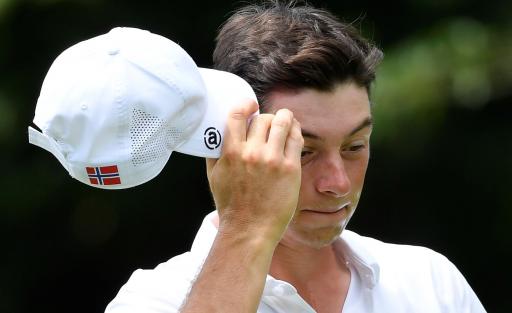 Viktor Hovland was forced to putt with his wedge for the final 10 holes in the final round of the Northern Trust after he thumped his putter against his golf bag in rage on the 8th hole at Liberty National.

Hovland was in contention for a third PGA Tour title starting just three shots back heading into Monday's final round, but after four pars to begin his round he then made a disastrous quadruple-bogey eight on the par-4 5th.

DEBATE: IS IT TIME TO DOCK SHOTS FOR TOUR PRO STROPS?

He calmed things down with a birdie at the par-5 6th and par at the par-4 7th, but then things reached boiling point following a double-bogey seven at the par-5 8th.

Hovland trudged off the green in disgust and proceeded to slam his putter against his golf bag. The putter had bent slightly and so Hovland was forced to use a different club to putt with from the 9th hole - and he chose to use a wedge.

Viktor Hovland won't have a putter on the back nine pic.twitter.com/KEBki2uQHQ

Hovland bogeyed the par-4 9th to go out in 42 shots and tumble down the leaderboard.

He did a birdie with his wedge at the 10th but missed a number of short putts on the way in, including a two footer at the 11th.

Hovland would go on to card a round of 77 to finish 7-under par for the tournament in tied 43rd.

However, positioned 14th in the FedEx Cup standings heading into the BMW Championship, Hovland is all-but assured of a place in the season-ending Tour Championship in two weeks time.

why Viktor Hovland is putting with wedge

a play in four acts pic.twitter.com/ou49fRWHV5

Hovland putting with a wedge for the next 2 hours pic.twitter.com/yJoIAKU6YB