Cameron Smith holds off Jon Rahm to win the first PGA Tour event of 2022 in Hawaii. 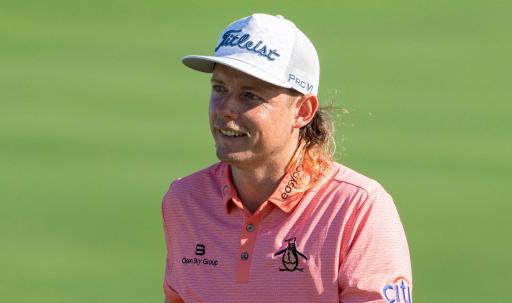 Cameron Smith has set a new PGA Tour record for the lowest winning score of 34-under par at the Sentry Tournament of Champions at Kapalua.

Ernie Els had previously set the low PGA Tour record in this very tournament back in 2003 when shooting 31-under par. Dustin Johnson was 30-under par at the 2020 FedEx St Jude and Jordan Spieth also achieved that feat at the 2016 Tournament of Champions.

The Australian won the two-man Zurich Classic of New Orleans in 2017 (with Jonas Blixt) and 2021 (with Marc Leishman), and he won the 2020 Sony Open in Hawaii.

"It was intense, Jonny and I played great down the stretch... very happy to just come away with the W," said Smith.

"I feel like I had a really good rest, didn't play much in the fall, did a lot of work on my swing and it paid off."

Smith's compatriot Matt Jones flew home at Kapalua with a stunning course-record 12-under 61 to finish solo third on 32-under par.

He also shot a 62 on Saturday meaning he was 23-under for the weekend, which set a new 36-hole scoring record in PGA Tour history.

FedEx Cup champion Patrick Cantlay finished fourth on 26-under par after closing with a 67.

Collin Morikawa also got hot in the final round posting a fantastic 62 to finish tied fifth on 25-under par alongside Justin Thomas, who rallied with a 65, and Daniel Berger, who was left to rue a cold putter in his round of 69.

NEXT PAGE: KEVIN NA'S EARLY WALK-IN GOES HORRIBLY WRONG IN THE FINAL ROUND AT THE TOURNAMENT OF CHAMPIONS