Kevin Na loves an early walk-in on his putts, but things went a little awry for him in the final round in Hawaii. 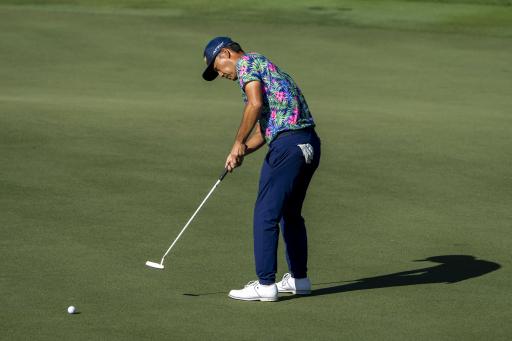 Kevin Na's customary early walk-in on his putts did not go according to plan with his birdie putt on the par-3 8th hole during the final round of the Sentry Tournament of Champions at Kapalua.

Na fired his approach shot into within six feet at the picturesque downhill 8th but he was then made to look a little silly when chasing home his birdie attempt.

When the early walk goes wrong for Kevin Na pic.twitter.com/mGRn1za8AO

WATCH: COLLIN MORIKAWA MISREADS A PUTT SO BADLY THAT IT PERPLEXES COMMENTATORS

Cutting to Kevin Na just to show him screw up the early walk pic.twitter.com/XgXZdjUjOS

Some of you may remember Tiger Woods had some fun with Na at TPC Sawgrass in 2019 when he first started doing the early walk-ins on his putts.

MORE: JACK NICKLAUS IS STILL VERY CURIOUS ABOUT HIS FIRST PAY CHEQUE ON THE PGA TOUR

Na will defend his Sony Open title in Hawaii on the PGA Tour next week.

The 38-year-old was born in South Korea but he is an American resident.

Na, who is ranked 29th in the world, has won five times on the PGA Tour during his career but has yet to play in the Ryder Cup.