Cameron Smith found the water with his second shot on the 18th hole at TPC Sawgrass, but scrambled for a bogey to seal a one-shot victory. 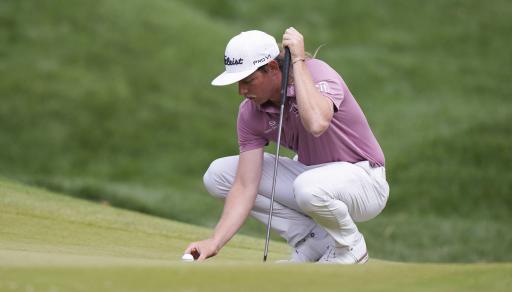 Cameron Smith survived a scare on the 72nd hole on Monday to win The Players Championship by one shot from an unfortunate Anirban Lahiri.

Smith, who has now won five times on the PGA Tour, found the water on the 18th hole at TPC Sawgrass but managed to make a bogey and card a 6-under-par 66.

Lahiri hung around all day and came close with a chip-in for birdie on the final hole to force Smith into his fifth career playoff.

The 28-year-old became the fifth player from Australia to win The Players Championship, with Jason Day being the last Aussie to win it in 2016.

"It's unreal. (It was) a long hard week and it's nice to come out on top. This is one of the big ones, it's nice to get it done," said an emotional Smith who hadn't seen his family for a sustained period prior to the event.

If there's such a thing as a clutch bogey ...

"They came over last week and golf really took a back step. I hadn't seen them for so long and all I wanted to do was hang out with them. It was cool to get a win for them."

Lahiri held the 54-hole lead on 9-under-par after shooting a 67 in the third round. He made a birdie on the 4th hole to maintain his challenge.

Smith got off to a scintillating start on Monday. He made five birdies in his opening six holes to race into a two-shot lead on 12-under-par.

However, the talented Australian made bogeys on the 7th and 8th holes to fall back to 10-under-par in a share of the lead with his Indian opponent.

Lahiri, a winner of 18 international tournaments, double-bogeyed the 8th hole after an errant tee shot. He went one behind Smith after he made a third consecutive bogey on the 9th hole.

Paul Casey began the final round one shot off the lead and he made two birdies on his front nine to share the lead with Smith on 9-under-par heading into the back nine.

Smith came into his own on the back nine. He made four consecutive birdies from hole 10 to hole 13 to move two clear of Casey, Bradley and Lahiri on 13-under-par.

The World No.10 made clutch pars on holes 14, 15 and 16 while Bradley played the last two holes in 3-over-par and Casey and Lahiri were still two behind.

Smith made a nerveless birdie at the par-3 17th hole to take a three-shot lead into the final hole on 14-under-par. After hitting his tee shot right into the pine straw on 18, he dramatically hit his second shot through the fairway and into the water.

This came moments before Lahiri birdied the 17th hole to reach 12-under-par. The deficit was now just two shots with Smith under pressure to win the first prize of $3.6 million.

From 57 yards, Smith scrambled for bogey to finish on 13-under-par and Lahiri failed to find the birdie he needed on the 72nd hole to force a playoff.

Next Page: Viktor Hovland on Daniel Berger drop fiasco: "We've got to protect the field"