Viktor Hovland on Daniel Berger drop fiasco: "We've got to protect the field"

Viktor Hovland has given his opinion over what happened with Daniel Berger during the final round of The Players. 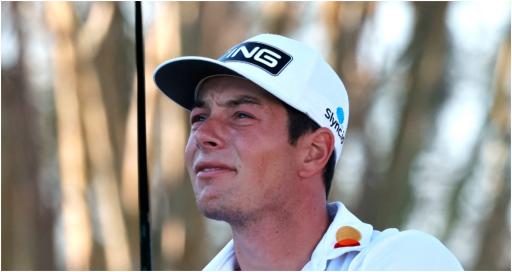 Viktor Hovland has given his take on the spicy altercation he had with Daniel Berger during the final round of The Players.

Berger, 28, sent his second shot into the water just right of the green on the par-5 16th at TPC Sawgrass so had to take a penalty drop.

Watch: Daniel Berger and Viktor Hovland in heated altercation over drop at The Players Championship

The American believed that his ball had crossed into the hazard further up but his playing partners Hovland and Joel Dahmen disagreed.

It all got a bit tense which culminated in Hovland saying: "I'm not really okay with it [the drop] being up there."

When Berger did drop, he told his playing partners: "I'm going to drop here for you guys but you're wrong".

He eventually went on to make a bogey six and it put an end to his chances to win the richest tournament ever on PGA Tour history.

Hovland was asked what he and Dahmen saw that Berger apparently did not.

Hovland explained: "Yeah, so obviously I was in kind of more of the left side of the fairway, Berger hitting from the right side, and Joel was kind of in the middle.

"But as soon as Daniel hit it in the air, he said, oh, water ball, and then I was watching the whole flight, and it was just short right of the green in the water on 16.

"From my perspective, obviously I was a little further left than Daniel, in my opinion I did not think the ball started very far left of the pin. It looked like it kind of started at the pin and then cut towards the end because the wind was also a little bit off the left.

"He obviously thought that he started it way left of the pin and then he kind of cut hard at the end, but that's not what Joel and I saw.

"I'm not going to put words in Joel's mouth, but he was closer to Daniel's line, and we both saw the same thing, that it kind of started pretty close to the pin and then cut to the right at the end, therefore not really crossing all the way up there close to the green.

"We thought it was closer to the grass bunker there, just past it, and yeah, we had a little discussion about it."

More: What happened between Hovland and Berger

Why was it so important for Hovland to stand his ground?

Hovland explained: "Yeah, it's not a fun conversation. Daniel's game is great, and I have massive respect for him as a player.

"But at the end of the day, we've got to protect the field and protect all the other guys. It's not a fun conversation, but when you strongly believe in something, you kind of have to stand your ground."

Hovland told the media that he had been involved in those situations before.

Berger ended up dropping in what Hovland described as a "compromise".

"He dropped a little bit further up than Joel and I kind of thought, but we ended up making a compromise, and that's where he hit it from," he said.

Did Berger and Hovland have a chat about it after they finished their round?

"I mean, not really. We try to keep it professional. It's not like we're trying to dog on Daniel and trying to screw him over," he said.

"It's just, that's what we believe, and he obviously felt strongly the other way. It's just what it is. I'm not accusing him of anything.

"The golf ball is in the air for a couple seconds, so it's tough to exactly pinpoint where it crossed and not. But Joel and I saw it in one way and he saw it differently."

Hovland finished at 7-under par for the tournament, which at the time of writing was in the top 10.

He had a chance to go top of the world rankings for the first time at The Players and needed to win or finish second with other results going his way to topple Jon Rahm.

Berger finished 6-under par. He and Dahmen declined to speak to the media immediately after they had finished.