It wasn't too long ago when Cameron Young was scraping the barrel in Korn Ferry Tour Monday qualifiers, but one week in Omaha changed his career. 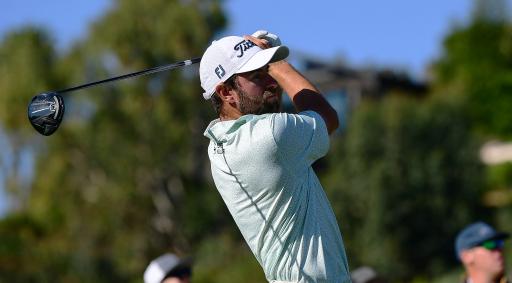 Cameron Young had a successful college career at Wake Forest University and threw himself straight into the professional sphere.

But his world came crashing down as when he was campaigning on the PGA Tour Canada in 2020, the Covid-19 pandemic stopped everything.

When golf reopened, Young had to endure weeks of Monday qualifiers which he described as "miserable." He reached a breakthrough moment at a Monday qualifier in Omaha, Iowa that changed his fortunes forever.

His wife Kelsey and his father David, a PGA professional, persuaded him to head to this event when he originally didn't want to and was fed up with playing well, but getting nowhere.

Young shot a fantastic 64 in the qualifier which earned him a spot in the Pinnacle Bank Championship. This is all the more amazing when you consider he slept through his alarm in the morning and arrived at the course 25 minutes before he teed off.

He came tied 11th in this event, which earned him another start at the WinCo Foods Portland Open. The man born in New York came tied 14th here and tied 6th the next week.

The 24-year-old was reaping the rewards of his resilience. He came tied second at the Nationwide Children's Hospital Championship the week after that too.

"People don’t always realize how fine the lines are. At that level everyone is good, everyone is trying to do the same thing and unless you do something special you won’t get anywhere," said Young.

"You can shoot 65 every week and you don’t get anything, not that I did that, but I did play three Mondays in a row and two mini-tour events in between them and I went back and did the math.

"My scoring average was like 66.8 for those three weeks and I made just $100 and didn’t qualify out of any of the Mondays."

In May 2021, he became just the 10th player ever to win back-to-back Korn Ferry Tour events at the AdventHealth Championship and the Evans Scholars Invitational.

He finished 19th in the Korn Ferry Tour points list and achieved his first-ever PGA Tour card. And to think, he was 25 minutes away from sleeping through that fateful Monday qualifier in Omaha.

Young has already played nine times on the PGA Tour this season and despite missing three cuts, he has two tied second finishes.

The potential he knew he had is clearly there. He finished runner up at the Sanderson Farms Championship and he pushed Joaquin Niemann all the way last week at the Genesis Invitational.

Young's story is one that teaches people not to give up and this is another story about how difficult Monday qualifiers are at every level of the game.

Just ask Rick Lamb who qualified for the Honda Classic this week after emerging from a 16-man playoff in Florida earlier this week.

NEXT PAGE: GOLF CLUB MEMBERSHIP ON THE RISE TOGETHER WITH THE COST OF A ROUND