David Feherty has been speaking about a career covering Tiger Woods, who was "the yardstick by which all others measured their inferiority". 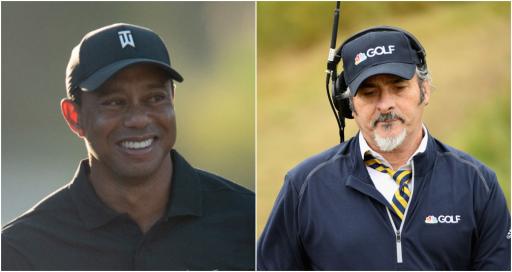 When it comes to Tiger Woods, you'd wager a large sum of money that David Feherty has a great deal of stories to regale you with.

Afterall, he has been given unprecedented behind-the-ropes access to Woods, 46, for a large part of his illustrious career.

He has seen those miracle shots in the flesh and seen the reactions from Woods' playing partners. In your life have you ever...

Feherty has recently given a Q&A to the PGA Tour about covering Woods. In it, there are some great nuggets.

The famed on-course commentator, now 63, admits that he already has his Tiger jokes ready for when he inducts Woods into the hall of fame.

There are some memorable moments between the pair. Feherty once pretended to give Woods advice on the range.

"He hangs on my every word," Feherty said in the footage. Woods pretends to shank it before instructing security to drag Feherty away.

"You need me! I crocheted you a headcover!" Feherty bellows as he is being tugged away by mock security guards.

Feherty was asked about one of the more memorable shots he had seen Woods hit. That was at Firestone South. It was gnarly.

Woods was about 190 yards away and in deep rough. He took an almighty swipe at this thing. Feherty said he couldn't reach the green.

"Like... a cubic yard of Ohio flies out goes about 50 yards up the fairway and I'm thinking, 'Oh no, he did it again'" said Feherty.

Woods was playing alongside Ernie Els. The South African didn't know Feherty's mic was on so they had to bleep out what he said.

What exactly did he say?

"He said, 'F--- me'. I campaigned for a long time that we don't need to show Tiger’s reaction to these shots he hits. It's the guy he's playing with, that's the relevant reaction.

"That was when Ernie was the second-best player in the world, so you can't get a more relevant reaction than that."

"That was often the hardest part of my job, giving the viewer a realistic sense of just how difficult it was, how impossible it would be for anybody to do it in that situation.

"He was the yardstick by which all others measured their inferiority."

"He made me look like an idiot on several occasions, saying he had to punch out or whatever when he didn’t. I had a front-row seat for the greatest golfer in history."

Despite Woods effectively living his life as if he was in a fish bowl since the age of two, Feherty had never heard of him.

"I didn't know a thing about him. When I first heard the name Tiger Woods, I thought, is that a golf course in India? I didn't have a clue.

"But from the minute I laid eyes on him and saw him play a couple holes I thought, that's different."

Next page: When Steve Williams told Tiger Woods "no"