Can Jon Rahm FINALLY become World No.1 at the Farmers Insurance Open?

Jon Rahm is playing in the Farmers Insurance Open at Torrey Pines this week, the scene of his maiden major victory at the US Open almost two years ago. 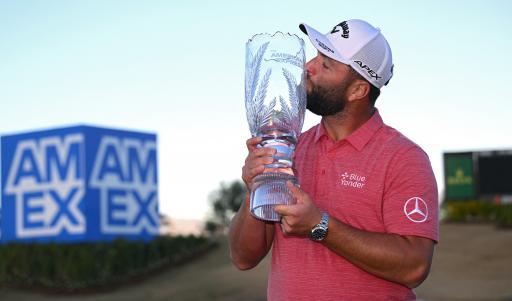 We can all speak about the Official World Golf Rankings until we are blue in the face and most of us have done already. Even Jon Rahm probably finds the debate tiresome.

We are where we are with the OWGR. Rahm has won four times in his last six starts and still isn't World No.1. As silly as it sounds, we all have to deal with the current state of the rankings as there will likely be more complexities to come in 2023.

The Spaniard could put part of the debate to bed this week at the Farmers Insurance Open because, with his 10th win on the PGA Tour, he could become World No.1 again.

Potentially, he doesn't even need to win. According to the OWGR Twitter guru that is Nosferatu, Rahm could finish solo third or better and still rise to the top of the pile.

There is one issue though. Rory McIlroy is making a return to competition this week and Rahm's pursuit of the World No.1 spot may hit a bump depending on how well McIlroy plays at the Hero Dubai Desert Classic.

As Nosferatu also reports, Viktor Hovland appeared to be in the field for the event in San Diego, but this isn't the case now. Hovland's inclusion in the field would've strengthened the field rating and given Rahm more ranking points if he was to win.

Currently, if both Rahm and McIlroy won their respective events, the difference in their total OWGR points would be paper thin. Nosferatu also reported that withdrawals can also affect the field ratings and OWGR points on offer at each event.

A win could certainly be on the cards for both players. Rahm won the US Open at Torrey Pines in 2021 and he will be returning to the famous venue looking for more success.

McIlroy has already won the Hero Dubai Desert Classic twice in his career and he arrives at Emirates Golf Club as World No.1 and the reigning DP World Tour Rankings winner.

He will tee it up with Ryan Fox and Tommy Fleetwood amongst a number of LIV Golf players in the field too. Rahm will be competing with the likes of Will Zalatoris, Xander Schauffele, Justin Thomas and Collin Morikawa.

Despite Rahm's disappointment at not being World No.1 and the general gripes expressed with the system by various players, we could certainly see a lot of changes in the top spot in 2023.