Jon Rahm to ESPN anchor after knocking out her teeth: "Yeah, I failed you!"

Jon Rahm has apologised to EPSN anchor Sage Steele after his errant drive during the 2022 PGA Championship left her bloodied and knocked out several teeth. 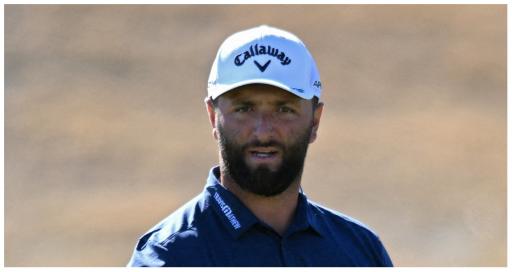 Jon Rahm has come face-to-face with the anchor he hit directly in the face with an errant tee shot during the 2022 PGA Championship.

Rahm's drive on the third hole during the opening round at Southern Hills left ESPN anchor Sage Steele bloodied and bruised.

It was so bad she needed to go to hospital after the golf ball knocked out several of her teeth and the presenter didn't work for the rest of the tournament.

Rahm said he wasn't aware this happened. Even after his round, nobody told him about it. Still, he feels terrible.

He met Steele virtually during a recent segment on ESPN's "SportsCenter" where she joked that it was an "honour" to be struck in the mouth by an errant tee shot by one of the greatest players in the world.

"As I was hiding behind the tree, no teeth left in my mouth, I look up and I saw you. And I'm like, the least he can do – because you didn't know it hit me – the least you can do is birdie this hole, for me, and you failed me. I think you only parred."

"Let me say, you are tough as nails. Jesus Christ! I hit that one hard, too; that was coming in with some speed. No, I don't think I birdied it. I think had a chance to birdie it; Yeah, I definitely failed you. I did not take advantage of the whole week. I'm sorry, I really failed you in that sense.

Steele said she got new teeth out of the ordeal and they look beautiful. 'I think this is a win,' she told Rahm

Rahm goes for history on the PGA Tour

Rahm has a rare opportunity to become the first golfer in five years to win three straight starts on the PGA Tour.

Dustin Johnson was the last player to do so in 2017 but he now plays LIV Golf League events.

Rahm couldn't have picked a better venue to try and attempt this at the Farmers Insurance Open at Torrey Pines.

He has twice tasted victory here, having won his maiden PGA Tour event in 2017 and the 2021 U.S Open.

"I'm aware this is very rare and I appreciate it, because if anything, it's a humbling feeling of how much work you need to put in to be able to do something like this
"It's always refreshing to come here and I love this tournament so much that every time I come I have that extra motivation to hopefully win it again. Got my first win here and I would love to be able to repeat as a PGA Tour event and be a two-time champion like many people have done in the past."

Rahm posted wins at the Sentry Tournament of Champions and The American Express, taking his PGA Tour earnings to a mind-boggling $4.1m this year alone.

Immediately after victory, he made an underrated joke.