Rory McIlroy is just one shot off the pace heading into the weekend at St George's Golf & Country Club. 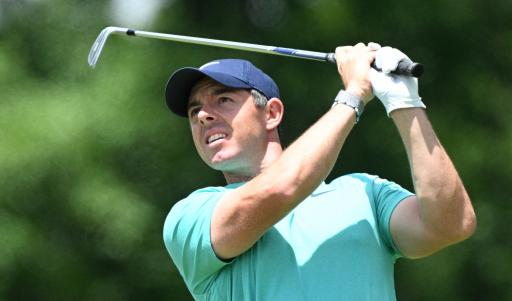 Rory McIlroy moved serenely into contention to defend his RBC Canadian Open title on day two at St George's Golf & Country Club, but the man everyone has to catch right now is American Wyndham Clark.

McIlroy certainly did not have his best stuff out there on Friday but he kept his composure having started slowly with an early bogey and he recovered for a round of 68 to bump himself up to 6-under par for 36 holes.

"The course played tougher today, a little breezier, and it was hard to get the ball close," said McIlroy, who is the defending champion despite winning this tournament in 2019. The Canadian Open was cancelled the last two years as a result of the Covid pandemic.

McIlroy added: "I wanted to come back, it's a shame it's been three years, I had a great time last time, the fans are great to me, and can't wait to play in that same atmosphere again this weekend."

Clark, bidding to land his maiden PGA Tour title, added a 70 to his stunning first-round 63 to remain in a one-shot lead on 7-under par.

The World No.293 came closest to winning on the PGA Tour when losing in a playoff to Brian Gay at the 2020 Bermuda Championship.

England's Matt Fitzpatrick had got to 10-under par at one stage in the second round but he stumbled badly on the closing holes with three consecutive bogeys for a level-par 70, and he joins McIlroy and his US compatriots Alex Smalley (67) and Keith Mitchell (67) on 6-under par.

US PGA champion Justin Thomas is 2-under par after a 69.