Chesson Hadley and Dustin Johnson, who is six shots behind the leader, are two of four players yet to complete the third round at Congaree. 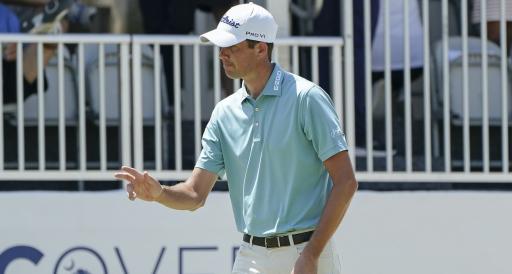 Chesson Hadley leads the Palmetto Championship by four shots during a third round that is due to restart on Sunday morning after being delayed by inclement weather.

Hadley set the pace after two rounds at Congaree and he built on his two-shot lead on day three with an incredible back-nine performance which was unfortunately put on hold by bad weather.

Having played the front nine in 1-over-par to drop back to 10-under-par for the tournament, the 33-year old made four birdies in his last six holes and he is one of four players who are yet to play their final hole.

Back in the mix.

Hadley, who is looking for his second PGA Tour victory, leads by four shots on 14-under-par from fellow American Harris English who is also due to finish his third round on Sunday morning.

It was a disappointing round for World No. 1 Dustin Johnson who was 1-over-par through 17 holes on Saturday and is currently six shots behind Hadley with one hole remaining of his third round.

The 36-year-old began day three in South Carolina two shots behind Hadley and although he made a birdie on the par-5 2nd hole to draw level with Hadley on 10-under-par, he made two bogeys on his front nine.

Johnson made another bogey on the 13th hole and despite making birdies at the 15th and 16th holes, he finished on 8-under-par for the tournament when play was suspended.

Tain Lee was the fourth player with one hole left of their third round to play on Saturday, which was initially suspended at 5.55 pm local time at Congaree.

At 8 pm, play was officially suspended for the day and it is set to resume at 7.30 am this morning, so that round four can also be completed on Sunday.

South African Garrick Higgo has shone on the European Tour this season and he sits on 8-under-par with Johnson in a tie for third place.