Koepka clarifies why he rolled his eyes when DeChambeau walked past him at the PGA Championship... 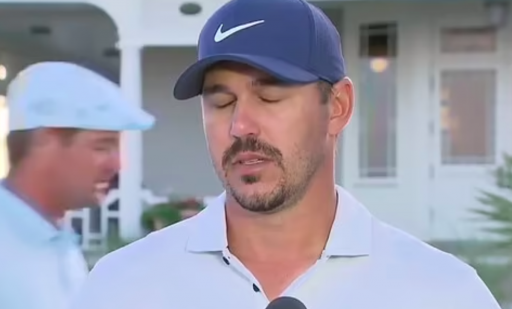 After weeks of speculation as to what Bryson DeChambeau exactly said to cause Brooks Koepka to roll his eyes as his compatriot walked past him during his post-round interview at the US PGA Championship last month, the four-time major champion has finally revealed all.

DeChambeau walked past in his metal spikes and appeared to mutter something as he trudged past Koepka, who was speaking to Golf Channel at the time. Koepka rolled his eyes, fired an expletive, and then it all kicked off on social media as everyone knows about.

So what happened, Brooks?

"As far as that goes, he didn’t say anything to me," said Koepka at this week's Palmetto Championship.

"He wasn’t speaking to me. He was, I guess, either signing his scorecard or wherever he was, and I was just to the right of the media tent, or I guess right in front of the microphones where you guys all were.

"I don’t want to say he was like screaming – he was saying something about how he hit a perfect shot and it shouldn’t have been there, and it was just very, very loud. I don’t think the mics picked up on that, but it felt like just so that the fans could hear.

"With the media right there, you kind of know, hey, look, we’re all kind of in this area, just tone it down, and it was just so loud. Then I think he realised that he had gotten right behind me, and he toned it down a little bit. I just lost train of thought, which I think was pretty obvious."

WATCH: BROOKS KOEPKA EYE-ROLLS AS BRYSON DECHAMBEAU WALKS PAST HIM

Koepka, who will bid to win his fifth major title and third US Open at Torrey Pines next month, missed the halfway cut at the Palmetto Championship at Congaree on 3-over par.

US Ryder Cup captain Steve Stricker fired a warning to both Koepka and DeChambeau this week to ensure they clear up their issues before the biennial clash with Europe at Whistling Straits this September.

Stricker also hinted Koepka and DeChambeau could play alongside one another at the US Open next week.

NEXT PAGE: STRICKER WANTS BRYSON AND BROOKS TO ACT "LIKE BIG BOYS"