Tain Lee is enjoying a solid week at the Palmetto Championship on the PGA Tour, but he was put under review for a questionable drop at Congaree. 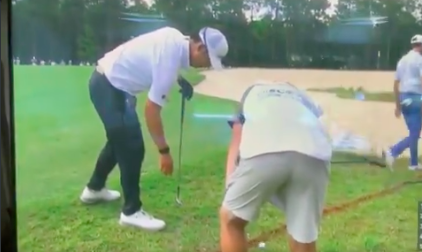 Tain Lee currently sits in tied seventh place at the Palmetto Championship as he awaits to resume his weather-delayed third round on Sunday morning.

Somewhat of a journeyman, Lee is playing impressively this week considering this is only his third start on the PGA Tour, all of which he has entered through Monday qualifiers.

Although his golf has caught the eye, Lee was put under review by the PGA Tour during yesterday's third round as he looked to take a knee-high drop in a questionable manner.

Some golf fans accused Lee of flicking his wrist when dropping the ball, which meant his ball would keep landing in the hazard and so he could end up placing it for a better lie.

Despite these accusations, the PGA Tour did not take the case any further and deemed the drop to be fine. Lee is currently on 6-under-par with one hole of his third round remaining, eight shots behind Chesson Hadley.

It is fair to say that the man from Maryland, who currently has no world ranking points, has split opinion with his drop and golf fans reacted to the footage.

"Get rid of the drop and just place the ball I say," one fan said.

"Are we reviewing video of every drop during every round? Post round? Please. See what you want but there’s nothing there. Call it during competition or leave it alone. Period," one fan commented.

"Literally throwing it at the ground," another fan said.

"He drops it and lets his hand wilt at the same time. He's clearly not throwing it. No issue here," another fan commented.

"I think it's okay. The wrist move is almost unnoticeable. Let's not get excited," one fan said.