Collin Morikawa on course to be World No.1 with big lead at Hero World Challenge

Collin Morikawa could become just the fourth player in the history of golf to become World No.1 before the age of 25 in the Bahamas. 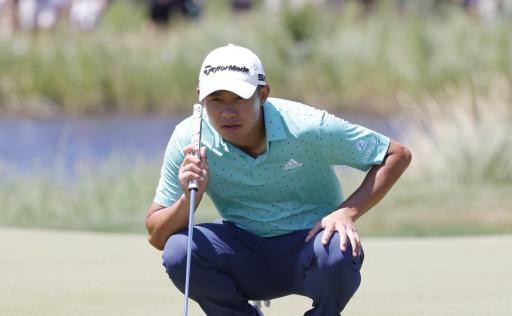 Collin Morikawa's pursuit of world domination did not wilt on day three of the Hero World Challenge as he surged into a five-shot lead in the Bahamas.

Morikawa, who recently became the first American to win the Race to Dubai on what used to be the European Tour, could become the fourth player to reach World No.1 before the age of 25 with a win this week.

He leads by five shots ahead of Brooks Koepka after a superb score of 8-under-par at Albany Golf Course took him to 18-under-par for the tournament.

The two-time major champion, winner of The Open Championship back in July, began the third round one shot behind Bryson DeChambeau but he got to work early with an eagle on the par-5 3rd hole.

He followed this with birdies at the 4th and 9th holes to reach 14-under-par for the tournament. At this stage, he had overtaken DeChambeau and led him by two shots.

A touch of class from the bunker on 18. @Collin_Morikawa leads by FIVE at the Hero World Challenge. pic.twitter.com/XAPuntrY8g

DeChambeau, making his first appearance on the PGA Tour this season, started in a peculiar way as he accidentally hit a fan at the back of the green on the 1st hole, overhitting his approach.

The 28-year-old then three-putted to make a bogey. Although he made birdies at the 8th and 9th holes, he bogeyed the 10th and 11th holes to fall back to 10-under-par for the tournament.

Morikawa stepped on the gas with birdies at the 10th and 11th holes. He sat on 16-under-par after 13 holes, but Tony Finau was only two shots back at this stage.

The two-time PGA Tour winner carded three birdies in his first six holes and with another birdie on the par-4 13th hole, he was in touching distance of Morikawa.

However, Morikawa did not relent. As Finau bogeyed two of his final three holes, Morikawa found birdies on the 14th and 15th holes and suddenly, he was five shots ahead on 18-under-par and his nearest pursuer was Koepka.

RELATED: THE STORY OF HOW AN AFRICAN PASTOR COULD PLAY ON THE DP WORLD TOUR!

Fresh from his win over DeChambeau in The Match last week, Koepka shot a solid 3-under-par 69 on Saturday to reach 13-under-par for the tournament, which is hosted by Tiger Woods.

Morikawa parred his last three holes to finish with a superb score of 64. He is on course to win for the third time in 2021.

Finau, Patrick Reed, Daniel Berger, Viktor Hovland and Sam Burns are in a five-way tie for third place on 12-under-par with 18 holes left.

NEXT PAGE: DO YOU HATE SLOW PLAY? FOLLOW THIS EASY TIP TO PLAY QUICK GOLF