Bryson DeChambeau is in contention at the Hero World Challenge and so is Brooks Koepka. Will they be paired together in the final round tomorrow? 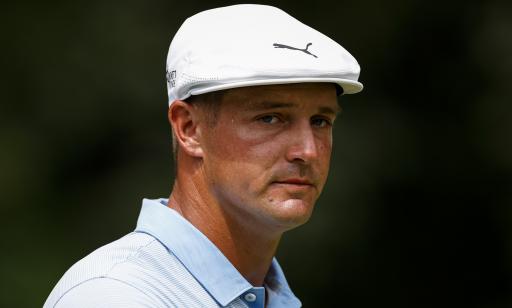 Bryson DeChambeau gave a very short and blunt answer to the prospect of playing with Brooks Koepka in the final round of the Hero World Challenge, hosted by Tiger Woods.

DeChambeau was in fine form in the Bahamas on Friday. He carded 10 birdies on his way to a scorecard of 8-under-par which also included a double-bogey.

The 28-year-old leads by one shot ahead of Brooks Koepka, Tony Finau and Collin Morikawa. Unfortunately, we will have to wait until the final round if we are to see DeChambeau and Koepka paired together.

The former US Open champion will tee it up with The Open champion Collin Morikawa in the final group of the third round at Albany Golf Course.

Koepka and Finau will play in the penultimae group. When asked about the chance of playing with Koepka, DeChambeau had one thing to say.

After a double at 16, @B_DeChambeau fires a dart to regain a share of the lead. pic.twitter.com/BU1BbHO0LU

"Sweet." That was it. Maybe his coy response was a reference to the beating that Koepka handed to him at The Wynn Golf Club last week.

The four-time major champion was in fine form at The Match, he beat DeChambeau 4&3 and the big-hitting American failed to win a hole.

It is very possible that we could see the second showdown in as many weeks between these PGA Tour heavyweights. Between them, they have won five major championships and 16 PGA Tour trophies.

The Hero World Challenge is DeChambeau's first appearance in the new season since America's historic victory over Europe at the Ryder Cup.

There are no FedEx Cup points to play for in the Bahamas this week, but there are world ranking points up for grabs.

DeChambeau's playing partner Morikawa could become just the fourth player in history to reach World No. 1 before the age of 25.